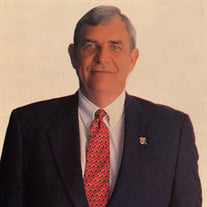 On the afternoon of Friday, November 27, 2020, Park Randall “Randy” Miller of Tallahassee was called to Heaven after a sudden battle with COVID19. Randy was born in Tallahassee on April 9, 1947, the son of Park Earl Miller and Marie Strickland Miller. A 1969 graduate of Florida State University with a BS in Accounting, he proudly served his country as an officer in the United States Army from 1969 to 1971. Randy married Wendy Lawson Burnett at St. John’s Episcopal Church in Tallahassee on December 16, 1972. Randy and Wendy welcomed their only child, daughter, Holly Randall, into their lives on November 1, 1982. Randy was a fixture in the governmental and legislative affairs arena in the Capitol city for decades. Lovingly nicknamed in certain circles as the ‘Guru of Lobbyists,’ his dedication earned him a distinguished resume. He retired as the President and CEO of the Florida Retail Federation and sister organization Georgia Retail Association in 2017. Prior posts included Executive Vice President and COO of Associated Industries of Florida and Executive Director of the Florida Department of Revenue. In his many roles and through all his affiliations, he was a trusted and respected advocate and friend among clients and peers alike. Randy retired to his home in Tallahassee and beach cottage at Alligator Point, Florida. He was a fraternal member of the J. Edwin Larson Freemason Lodge and life member of the AMVETS, zealously chairing the planning committee for the Tallahassee National Cemetery Patriot/ Carillon Bell Tower construction project. He was a car enthusiast, particularly Corvettes having owned 13, and as a lifetime member of the National Rifle Association, an avid trap shooter spending most Saturday and Sunday mornings at the Tallahassee Rifle & Pistol Club, where he was the board Treasurer. He enjoyed fishing at St. Marks and Alligator Point, and spending time with his three dogs, Gatsby, Little Miss Daisy, and Scarlett. Randy is remembered by his wife, Wendy; his daughter, Holly (Miller) Moore and son-in-law Justin Moore; his sister, Connie (Miller) Hudson and husband David, son Joshua, and daughter Lauren. He was preceded in death by his father, mother, and brother, Bruce Miller and wife Darlene, and son Bodie. Randy lived his life as a Good Samaritan embodying integrity, honor, and grace. Wendy and Holly’s loss is profound; Wendy has lost the love of her life and best friend, while Holly has lost her true hero, who she called Dad. A service will be held at noon on Friday, December 4, 2020, at Bevis Funeral Home located at 200 John Knox Road in Tallahassee. The service will be live-streamed and can be accessed on the Bevis Funeral Home website at https://www.bevisfh.com/m/obituaries/Park-Miller/MemorialEvents. Following the service, Randy will be laid to rest with military funeral honors and committal service at 2:00pm at the Tallahassee National Cemetery. Randy was sincere in his belief that freedom is not free. In lieu of flowers, please consider supporting our veterans through a donation to the AMVETS Tallahassee Post 1776, Inc. directed to the Tallahassee National Cemetery Patriot Tower/ Carillon Project and designated in Randy’s honor at: www.amvets1776.org/projects.html or by mail to P.O. Box 16225, Tallahassee, FL, 32317. Todd Wahlquist with Bevis Funeral Home (850-385-2193, wwwbevisfh.com) is assisting the Miller family with their arrangements.

On the afternoon of Friday, November 27, 2020, Park Randall &#8220;Randy&#8221; Miller of Tallahassee was called to Heaven after a sudden battle with COVID19. Randy was born in Tallahassee on April 9, 1947, the son of Park Earl Miller and Marie... View Obituary & Service Information

The family of Park Randall 'Randy" Miller created this Life Tributes page to make it easy to share your memories.

Send flowers to the Miller family.