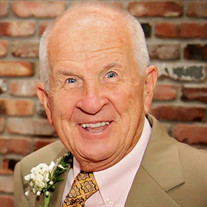 Peter Butler, Sr. passed away on July 11, 2021, at his home in Tallahassee, Florida, at the age of 83. Peter was born July 23, 1937, in Tuckahoe, NY. He enlisted in the United States Air Force in 1957 and attained the rank of Senior Master Sergeant. Early in his military career, he met the love of his life, Shirley Ann (Sam) McCabe. Their shared dreams were imagined on the coast of Maine at the Nubble Lighthouse. Peter and Sam were married on August 5, 1961at St. Mary’s Church in Dover, New Hampshire, devoting their lives to each other. Peter proudly served in the Air Force in multiple capacities around the world throughout his 20 years of service, and was a proud member of the 509th Bombardment Wing. He was part of the elite team that worked on-site at Skunk Works, where he was Crew Chief for the SR-71 Blackbird, which remains the world’s fastest airplane. He also manned an airstrip in Southeast Asia during the Vietnam War. Peter greatly enjoyed his many years as a recruiter, and served as Sector Supervisor for Florida, Georgia, and Alabama recruiting young people to pursue a career in the Air Force. After Peter retired in 1977 honorably with multiple commendations, he joined US Senator Richard Stone’s team, where he oversaw Veteran and Military Affairs. He and Senator Stone’s staff co-authored a book during his tenure entitled “Dear Congressman” that is in the permanent collection at the Library of Congress. After Senate service, he worked in the insurance industry. In 1990, he turned his attention back to public service. Peter joined the State of Florida and worked with three administrations (Governor’s Bob Martinez, Lawton Chiles, and Jeb Bush). He loved sharing stories about his time at the Department of Business and Professional Regulation, where he was the Bureau Chief for the Division of Yacht and Ship brokers. His job responsibilities required him to work at Florida Marinas in disguise, wearing khakis and Topsiders, to identify bad guys and lead enforcement efforts to protect the State. When he completed his second retirement, he and Sam dedicated their lives to family, travel, golf, bowling, and Florida State Athletics. Peter and Sam were active competitors in the National Senior Games and huge supporters of the Tallahassee Senior Center. Over the years, as the effects of Peter’s exposure to agent orange settled in, he battled Diabetes, Parkinson’s, and Heart Disease. Still, he never once complained, and his positive outlook on life never wavered. Peter was an active participant in the Capital Regional Cardiac Wellness Program and continued his commitment to serving others by coordinating many Leon County fundraising efforts focused on Heart Healthy Awareness programs. He truly looked forward to time with his friends at Rock Steady Boxing at Sweat Therapy Fitness, and he loved cheering Sam and her teammates on to victory at the weekly bowling league. Peter and Sam have been active and committed to their Catholic faith and have been longstanding members of Good Shepherd Catholic Church, where they have served God and a wonderful community of believers. Peter was preceded in his death by his parents, Thomas and Elizabeth, and his older brother Thomas (Buddy). He is survived by his wife of 59 years, Sam. Daughter Maureen Price and husband Billy Ray Price of Moultrie, GA.; son Peter Butler, Jr. and wife Karen, of Tallahassee; seven grandchildren Kaitlyn Stembridge (Gwen), Dominic Price (Anna), Jessica Hof (Eric), Samantha Price, Donovan Price, Anna Grace Butler and Paul Butler, and one great-grandson Judah Price; Sister-in-law Antoinette Butler, of Greenville, NC; sisters, Marcella Fenningham and Mary Wainer. Bevis Funeral Home is coordinating arrangements. Friends are invited to attend a funeral mass at Good Shepherd Catholic Church on Friday, July 23rd at 11:00 am. All friends and family are welcome to attend. Following the mass, there will be a reception in the Church Fellowship Hall, then the family will have a private graveside ceremony at the Tallahassee National Cemetery. The Memorial Mass will be lived streamed at 11:00 AM, please go to www.Goodshephardparish.org to view. In lieu of flowers, the family asks friends to honor his memory by making a contribution to support one of the following two organizations: Rock Steady Boxing Scholarship Program at Sweat Therapy Fitness, 1122 Thomasville Rd #5, Tallahassee 32303 The Michael J. Fox Foundation to support Parkinson’s research, via http://www.Michaeljfox.org Todd Wahlquist with Bevis Funeral Home (850-385-2193, www.bevisfh.com) is assisting the family with their arrangements.

Peter Butler, Sr. passed away on July 11, 2021, at his home in Tallahassee, Florida, at the age of 83. Peter was born July 23, 1937, in Tuckahoe, NY. He enlisted in the United States Air Force in 1957 and attained the rank of Senior Master... View Obituary & Service Information

The family of Peter Paul Butler Sr. created this Life Tributes page to make it easy to share your memories.