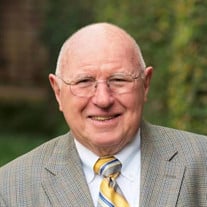 Peter’s life work is now complete. The son of a Greek immigrant, Peter was called home on January 22, 2022 to enter Eternal life. Pete’s story began in Cleveland, Ohio on February 25, 1936 when he was born as the youngest of 4 siblings (Robert, Jean and Ruth) to Peter & Genevieve Mitchell. Pete’s mother was of Welsh decent and was born in 1894. His father, born in 1896 in Megalopolis, Greece and immigrated to the United States alone at age 13. His Greek birth name was Petro Bill Mehalopulos…which was changed to Peter Mitchell following his arrival at Ellis Island, New York. He became a US Citizen after he fought for the USA in World War I. Pete and his family endured the Great Depression and World War II before moving to Ft. Lauderdale, Florida in the early 1950’s. Pete wrote extensively about his heritage in an autobiography for his family…and given the strain of world events of that time, had very little recall of his childhood. Pete was the first in his family to attend college. He attended Florida State University where he worked for R.A. Gray at the Florida Secretary of State office, where he met his wife of 63 years, Melanie May Drew. They were married on December 20, 1958. Following their marriage, he was stationed at Ft. Lee Virginia and was honorably discharged from the U.S. Army with the rank of Captain. Following his Army service, Peter and Melanie returned to Tallahassee, where he worked for Frank Deller at the Tallahassee Chamber of Commerce, and had two children, Drew and Bart in 1961, and 1963. After working at the Chamber, Pete went to work for the Florida Highway Safety Commission where he created ARRIVE ALIVE, which was a was copied throughout the US, by other safety commissions. It is still actively used today by the State of Florida. Due to the tremendous success of the ARRIVE ALIVE program, Pete was asked to join Governor Claude Kirk’s administration and was ultimately named Director of the Highway Safety Commission during the remainder of the Kirk Administration. In 1971, Peter and Melanie formed Peter Mitchell Associates Inc, one of the first advertising agencies in Tallahassee. Over the years, many notable businesses were clients of the firm, and his professional and personal relationships with many Tallahasseean’s grew exponentially. Pete was a man of firm conviction, honesty and principle, which was admired by many. Their tenure with one of the Agency’s first clients spanned greater than 50 years. Hard work was one of Pete’s trademarks and he and passed it along to his boys. Pete played as hard as he worked. Melanie’s family were avid boaters and fishermen and this passion became a part of Pete’s life as well. In retirement, Pete really enjoyed his days on the Gulf of Mexico and throughout the Bahamas aboard the ANONYMOUS with Capt. Mark, family and friends. Pete was teased often about never getting too far offshore, because of the lack of internet connection. Even in retirement, he was always “plugged in” to happenings at church, or business dealings with the marina, and of course, staying in touch with friends. Peter is predeceased by his parents, Peter Mitchell Sr. and Genevieve Mitchell, and his siblings Ruth, Jean and Bob. He is survived by his loving wife of 63 years Melanie, and sons Drew Mitchell, and Bart Mitchell (Holly). He is also survived by his granddaughter Megan Peters (Gabe), great-grandchildren, Blake, Presley, Carter and Jude; and grandson Andrew Mitchell (Paige), whom were the light of his life. GO NAVY! A small, family church service is scheduled for Thursday, January 27, 2022 followed by a public graveside service at MeadowWood Memorial Park on Timberlane Road at 3:30pm. A celebration of Peter’s life will immediately follow. In lieu of Flowers, the family requests donations be made to St. John’s Episcopal Church, 211 North Monroe Street, Tallahassee, Florida 32301 in Peter’s honor. Kelly Barber of Bevis Funeral Home (850-385-2193 or www.bevisfh.com) is assisting the Mitchell family with their arrangements.

The family of Peter B. Mitchell, Jr. created this Life Tributes page to make it easy to share your memories.

Peter’s life work is now complete. The son of a Greek immigrant,...