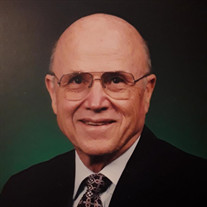 Ralph C. Kenyon was born November 14, 1930 in Columbus, MT to Vernon and Ethel (Weppler) Kenyon and died on September 5, 2021 in Tallahassee, FL. He was raised in Columbus and Livingston, MT, spending time each summer at the Weppler Ranch in Stillwater County. He graduated from Montana State College in Bozeman with a degree in Architecture in 1953. He was then drafted into the US Army which took him to Fort Leonard Wood, MO. At Saint Luke’s Methodist Church, in nearby Springfield, he met Dalcie Mae Langston. They were wed at Saint Luke’s on May 1, 1955. He returned to Montana in September 1955 with his new bride. There he utilized his degree in both private and government positions. In 1969 the family moved to Tallahassee where Ralph worked for the State of Florida in the Office of Planning and Budget and the Department of Corrections where he oversaw the construction of new prisons. He retired from the Department of Corrections in April 1993. Following retirement, Ralph remained in Tallahassee where he designed and built his retirement home. As a life-long member of the Methodist Church, he utilized his talents from his high school years on. In high school he designed the Livingston cabin at the nearby Luccock Park Church Camp. He later assisted in the planning and building of Grace Methodist Church in Billings and Covenant Methodist Church in Helena. In Tallahassee he was involved with multiple repair and renovation projects at Saint Paul’s United Methodist Church, most notably the remodeling of the kitchen. He was also a member of the Burleigh Law Sunday School Class at Saint Paul’s for 48 years. There he enjoyed not only Sunday classes but also many fellowship activities throughout the years. He was predeceased by Dalcie, his wife of 62 years; his sister Doris Donaldson and his brother, Bob Kenyon. He is survived by his daughters: Jana (Joe)Evans, Karla (Ron) Fletcher, grandchildren: David (Kathleen)Evans, Katherine (Eric) Hunt, Sarah Fletcher, Karen Fletcher, John (Crystal) Evans, Mary Fletcher, James (April) Evans, and Marsha Fletcher, and 11 great grandchildren: Liz, Eileen, EN, Amelia, JJ, William, Isabelle, Aaron, Charles, Emma, and Levi. Visitation with the family will be at 1:00pm on September 11, 2021 at Bevis Funeral Home. Memorial Service will be at 2:00pm with a reception to follow. The service will be livestreamed. To watch, go to the green "Photos & Videos" tab above and click the thumbnail titled "Webcasting Video" at the scheduled service time. The footage will also be accessible after the service has concluded. The family suggests that in lieu of flowers, donations may be given to Alzheimer’s Project, Inc, the Salvation Army, or the Florida United Methodist Children’s Home. Rocky Bevis of Bevis Funeral Home is assisting the family with their arrangements. (850-385-2193 or www.bevisfh.com)

Ralph C. Kenyon was born November 14, 1930 in Columbus, MT to Vernon and Ethel (Weppler) Kenyon and died on September 5, 2021 in Tallahassee, FL. He was raised in Columbus and Livingston, MT, spending time each summer at the Weppler Ranch in... View Obituary & Service Information

The family of Ralph C. Kenyon created this Life Tributes page to make it easy to share your memories.

Send flowers to the Kenyon family.