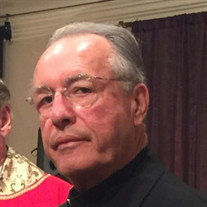 Raymond (Ray) Bradford Nolton, age 78, of Tallahassee, FL went home to be with his Lord and Savior on Sunday, September 5, 2021. He is survived by his loving wife of six years, Wanda Nolton; his sister, Jacqueline (Jackie) Hand and brother-in-law, Samuel (Sam) Hand; his son, Adam Nolton; his two daughters, Heather Nolton Thomas and Nicole (Niki) Nolton; his son-in-law Gerald (Gerry) Thomas; his step-daughter, Amy McDaniel; his stepson, Scott Hogg; his five grandchildren (Grace Thomas, Cooper Thomas, Caden Morghem, Hugh Nolton and Ava Nolton); his three step-grandchildren (Madison Setliff, Brigit Hogg and JD Hogg); one nephew, Eric Hand; two nieces, Jessica Hand and Jacqueline Hand Ford; and one great-nephew, James Hand-Demaria. Ray was born in Pittsburgh, Pennsylvania on February 17, 1943 to Zelma Chambers Nolton and John Paul Nolton, who preceded him in death. Ray was also preceded in death by his brother, Mark Nolton. Ray graduated from Brea-Olinda High School in Brea, California and went on to attend San Jose State College where he graduated with a Bachelor of Science degree in 1966. He moved to Pensacola, Florida in order to pursue a career in Juvenile Justice. He received a Master of Science in Counseling and Human Development degree from Troy State University, and worked for the State of Florida for over thirty years, serving in numerous administrative positions both in Pensacola and Tallahassee. After retirement, he then dedicated the rest of his life serving in the Communion of Evangelical Episcopal Churches. He became a Deacon in 2006, and then an ordained Anglican priest in 2007. Among his many volunteer and pastoral roles, Ray served as a Chaplain at Tallahassee Memorial Hospital and visited hundreds of patients over the years, praying for them and providing comfort, some of whom who were in their final hours of life. Above all, Ray treasured the time he spent with God, his church, his wife Wanda, his family and his friends. A devoted father, his greatest source of pride were his children and grandchildren, and there was nothing more important to him than sharing and showing love to the people in his life. However, Florida State University football came in as a close second. A life-long, devoted fan, he even helped host a local sports talk show—the Locker Room—where he commented on FSU football as, “King Ray of Killearn.” He played and excelled in many sports in his young adult life, which carried over to later years at local YMCA’s where he played basketball in adult recreational leagues both in Pensacola and Tallahassee. Many will remember Ray for his sense of humor. He enjoyed making others laugh and inspiring them to look at life in a non-serious, joy-filled way. “God gave us life to live it to the fullest,” was what he aspired to do, and to teach others to do the same. In his honor, his family asks that you reach out to the people in your life and let them know you love them. Crack a joke with a stranger and get them to laugh, smile, and to remember God’s love and the joy that is all around us. Ray will be deeply missed by his family and friends. May his love and laughter live on in the hearts of all those who knew him. In lieu of flowers, we ask that donations be made in Ray’s memory to the Foundation for Leon County Schools. A life-long advocate for youth, he understood the importance of public education and its impact on the future of our children, and the community as a whole. Vist the FLCS webpage and click on Individual Donations and then select “In Memory Of”: https://foundationforlcs.org/ways-to-give/ A celebration of Ray's life will be held at 2:00 PM, Sunday, October 3, 20121, at Bevis Funeral Home Chapel, 200 John Knox Road, Tallahassee. Todd Wahlquist with Bevis Funeral Home (850-385-2193, www.bevisfh.com) is assisting the family with their arrangements. .

Raymond (Ray) Bradford Nolton, age 78, of Tallahassee, FL went home to be with his Lord and Savior on Sunday, September 5, 2021. He is survived by his loving wife of six years, Wanda Nolton; his sister, Jacqueline (Jackie) Hand and brother-in-law,... View Obituary & Service Information

The family of Raymond Bradford Nolton created this Life Tributes page to make it easy to share your memories.

Send flowers to the Nolton family.