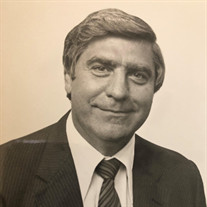 Raymond "Ray" Robert Schultz was born in Rochester, New York on April 11, 1935, and passed away in Tallahassee on April 1, 2022. He was 86 years old. Ray was a proud Army veteran, and after leaving the service became a successful businessman. He started his company, R.S. Aviation, Inc. in 1967 from his garage in Hialeah, Florida. His company continued to grow for over 40 years. His passion for hard work, and his ideals of helping others guided him throughout his life. His nonprofit work with Sister Cities International and U.S. Disaster Relief highlight his lifetime of unselfish service to others. He was also very active in his later life with United Yorkie Rescue and along with his wife Dianne rescued and fostered many little dogs in their home. Most importantly, Ray will be remembered as a family man. He was an amazing and loving husband, brother, father, grandfather, "Papa", great-grandfather and uncle. He did not want to be remembered for what he had in life, but rather for his enduring devotion and dedication to helping everyone he knew when a need arose. Those who were fortunate to know Ray will recall that he was happiest when he was giving, not receiving. He was an unstoppable force, who never saw a problem, only a solution. Although Ray was extremely focused, he never let an opportunity to tell a joke or play a prank on someone go by. He loved the sound of laughter, and he touched so many lives in one lifetime. Those who knew him will recall advice he may have given them from years ago. He will be profoundly missed and loved forever! Time cannot diminish the bright light that was Ray Schultz. Ray was preceded in death by his parents Urban and Gertrude Schultz, and his brother Edward Schultz. He is survived by a large loving family: his beloved wife of 32 years, Dianne Donaldson Schultz: his children, Robert, Richard "Rick" (and his wife Robin), Linda Schultz Burnett, and Robin Dailey (and her husband Robert). He was devoted to his grandchildren: Michelle, Steven, Kaitlin, Russell, Madison, Rachel, Raymond, Emily and Jacob, as well his great-grandchildren, and may nieces and nephews who always will remember his sense of humor and his generosity. The family will receive friends from 10:00 to 11:00 AM. Monday, April 25, 2022 at Bevis Funeral Home, 200 John Knox Rd, Tallahassee, Florida 32303, a celebration of Ray's life will follow at 11:00 AM. He will in inurned following the service at 1:00 PM at Tallahassee National Cemetery, Tallahassee, Florida. Memorial donations in Ray' memory can also be made to the rescue group that he had been a member of for 20 years, United Yorkie rescue @ www.uyr.us. Todd Wahlquist with Bevis Funeral Home (850-385-2193, www.bevisfh.com) is assisting the Schultz family with their arrangements.

Raymond "Ray" Robert Schultz was born in Rochester, New York on April 11, 1935, and passed away in Tallahassee on April 1, 2022. He was 86 years old. Ray was a proud Army veteran, and after leaving the service became a successful businessman.... View Obituary & Service Information

The family of Raymond "Ray" Robert Schultz created this Life Tributes page to make it easy to share your memories.

Send flowers to the Schultz family.