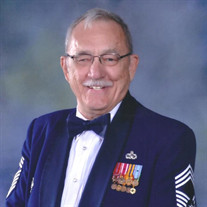 Retired Chief Master Sergeant John E. Schmidt, Jr, 90, of Tallahassee, Florida died at Westminster Oaks on May 8, 2022. Born on September 11, 1931, in Baltimore, Maryland, he moved to the Panama Canal Zone (Canal Zone) in 1935 when his father went to work for the Panama Canal Company. After graduating from Balboa High School in 1950, he initially joined the US Naval Reserve and subsequently enlisted in the US Air Force in 1951. During his thirty-years of active duty, he served in the Canal Zone twice with duty at Albrook AFB as the Ground Training NCO, and then as the Non-Commissioned Officer in Charge of Technical Training with the Inter-American Air Forces Academy, Albrook AFB, Canal Zone. He also served at Mather AFB, California; Moody AFB, Georgia; Andrews AFB, Maryland; United States Air Force Academy, Colorado; US Military Assistance Command, Saigon, Vietnam; and his final assignment at Tyndall Air Force Base, Florida as the Base Sergeant Major for the 4756th Air Base Group. He retired from active service on 1 May 1981 at Tyndall AFB. After retirement, John was instrumental in the start-up of the Air Force Junior ROTC program for Leon County Schools with a unit being established at Amos P. Godby High School in August 1981 where he was the Assistant Aerospace Science Instructor. John worked tirelessly to help establish subsequent JRROTC programs at three other high schools before he retired from teaching in 1996. The Godby High School JRROTC building is proudly named after Chief Master Sergeant John E. Schmidt, Jr. John became a member of the Air Force Association in 1954 and maintained a very active role in the leadership of the local “Colonel H. M. “Bud” West Chapter of the Air Force Association (AFA). As a life member of the AFA, John served at the national, state, and local levels of leadership and as the local chapter president for many years. In 1985, John began a tireless search for his ancestors, and after six trips to Germany, he was able to establish nearly 13,000 individual names with direct connections to his family. Having been raised in the Panama Canal Zone, John was an avid fan of the historical and operational capabilities of the canal as well as a vocal advocate of the original American engineering, ingenuity and management skills that built and managed the Panama Canal for over 85 years. He has been a frequent speaker at local organizations and in recent times, was called upon to report on the current expansion of the Panama Canal. He was honored to be called a “Canal Zone Brat.” In 2010, John moved to Westminster Oaks in Tallahassee, Florida where he became actively involved in many of community programs and diligently led efforts to recognize his fellow veterans and helped establish and maintain the “Wall of Honor.” Among many things, John will be remembered for his dedicated service to the United States Air Force and for his patriotic motivation to inform the public of the proper use and display of the National Colors. He was most often referred to as the “Flag Man” of Tallahassee and the person to call to get the correct answers to United States Flag Code questions. Over the years, John has been called upon to teach classes in the history and protocol of the flag to local children. His awards and decorations include the Bronze Star Medal, Meritorious Service Medal, Air Force Commendation Medal, Air Force Outstanding Unit Award, Air Force Good Conduct Medal, Army Good Conduct Medal, National Defense Service Medal, Vietnam Service Medal, Air Force Longevity Service Ribbon, NCO Professional Military Education Graduate Ribbon, Small Arms Marksmanship Ribbon, Vietnamese Cross of Gallantry, and the Vietnamese Campaign Medal. John was also selected as the Outstanding Senior NCO of the Year for the United States Air Force Academy in 1970. John also loved being a part of “community.” He was a member of many organizations including the following: AFA; Air Force Sergeants Association; Panama Canal Society Inc; Panama Canal Museum; Leon County Sheriff’s Office Citizen’s Academy Alumni Association; Florida Sheriff’s Association; United States Air Force Military Training Instructors Association; 33rd Infantry Regimental Combat Team Association; USAF Crash Rescue Boat Association; National Association for Uniformed Services; Baltimore County, MD, Historical Society; Florida Education Association; National Education Association; Armed Forces Top Enlisted Association; American Legion; National Association for Uniformed Services; National Rifle Association; Disabled American Veterans; and American Merchant Marines Veterans Association. Survivors include his children: Daniel Mcrae (Sylvia) of Tallahassee, Florida; Kathleen (Tim) Ryan of Colorado Springs, Colorado; John Schmidt (Diane) of Gainesville, Florida; Tracy (Dusty) Boyce, of Monticello, Florida, and Ruth (Mike) Ivester of Ellijay, Georgia. John was the proud grandfather to thirteen (13) grandchildren and great grandfather to nine (9) great-grandchildren. He is also survived by his brother, Doug Schmidt (Sharon) of Kerrville, TX and his sister Jackie Bishop of Austin, TX. The family will receive friends Wednesday, May 18th, 2022 from 5:00 p.m. until 7:00 p.m. at Bevis Funeral Home. Memorial services will be held 12:30 p.m. Thursday, May 19th at Faith Presbyterian Church. Inurnment will follow at 2:00 p.m. with Military Honors at Tallahassee National Cemetery. All are welcome to attend. In lieu of flowers, donations can be made to the “Colonel H. M. “Bud” West Chapter of the Air Force Association for use in the AFROTC/CAP Cadet Awards Fund. Susie Mozolic of Bevis Funeral Home is assisting the family with their arrangements. (www.bevisfh.com 850-385-2193)

Retired Chief Master Sergeant John E. Schmidt, Jr, 90, of Tallahassee, Florida died at Westminster Oaks on May 8, 2022. Born on September 11, 1931, in Baltimore, Maryland, he moved to the Panama Canal Zone (Canal Zone) in 1935 when his father... View Obituary & Service Information

Send flowers to the Schmidt family.