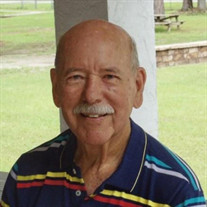 Richard Randolph Roberts, 89 of Tallahassee, Florida passed away on September 11, 2021. He was born on November 28, 1931, to John and Delma Raker Roberts in the community of Sanborn, Florida. He attended Sopchoppy High School, played basketball and stared as a football running back, graduating in May 1950 as Salutatorian of his class. After graduation he went to Texas and worked a short period of time on a tugboat with 2 of his brothers, Bill and M.L. He then returned to Tallahassee and got a bread-delivery job working for Holsom Bread Company. After working there for only a short period of time, he received his draft orders. In the meantime, however, he enlisted in the United States Air Force on January 5, 1951, and served in the Air Force for 22 years. His basic training was in San Antonio, Texas. Thereafter, he was in North Carolina for a year, Alaska for 2 years, and Panama City for 6 years before serving overseas in Tachakawa, Japan for 3 years. He then returned to the United States and was stationed in Greenville, Mississippi, before going to Gunter Air Force Base in Montgomery, Alabama. He eventually retired as Master Sergeant while stationed at Shepard Air Force Base in Wichita Falls, Texas. During his tenure in the military, he attended and completed college, obtaining his Bachelor of Science degree and then his Master of Arts degree from Midwestern University in Wichita Falls. Randolph married his high school sweetheart, Frances Carraway, on January 20, 1952, and they had 2 sons Dick and Mike. After retirement from the Air Force, he and his family returned to Tallahassee and 2 weeks later he began teaching Social Science at Taylor County High School where he taught for 7 years before transferring to Lincoln High School in Tallahassee to teach Social Science there for 15 years. He then again retired after having taught high school for 22 years. Randolph was predeceased in death by his wife Frances of 61 years. He is survived by his sons Dick of Tallahassee, and Mike (wife Gina) of Spring, Texas; 5 grandchildren--Nathan (wife Courtney) of Tallahassee; Kathleen Roberts Jarashow (husband Ben) of Rochester, New York; Meredith Roberts Wheeler (husband Drew); Allison Roberts Foster (husband Ryan); and Will Roberts (wife Sabrina) all of Houston, Texas; and 11 great-grandchildren. He is also survived by 3 sisters: Elizabeth Smith, Callie Quigg and June Seymour, as well as many nieces and nephews. Randolph was of the Methodist faith and served as a Steward in the Methodist Church in Texas and Alabama. He was a member of the Sopchoppy United Methodist Church. The family would like to extend special thanks and appreciation to the staff at Azalea Gardens Memory Care Facility and Big Bend Hospice for the loving care and attention extended to our loved one during his final days. In lieu of flowers, contributions can be made to the Sopchoppy United Methodist Church or Big Bend Hospice. David Conn and Kimberly Crum with Bevis Funeral Home of Crawfordville are assisting the family with arrangements. (850-926-3333, www.bevisfh.com)

Richard Randolph Roberts, 89 of Tallahassee, Florida passed away on September 11, 2021. He was born on November 28, 1931, to John and Delma Raker Roberts in the community of Sanborn, Florida. He attended Sopchoppy High School, played basketball... View Obituary & Service Information

The family of Richard Randolph Roberts created this Life Tributes page to make it easy to share your memories.

Send flowers to the Roberts family.