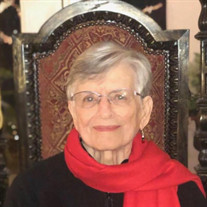 On October 14, 1930, Rose Marie Colangelo was delivered at home in Alexandria, Virginia by her Italian immigrant grandmother. She was the third daughter of Virginia and Domenico Colangelo. The happiness surrounding the new arrival was interrupted, however, when it was discovered another, unexpected, baby was waiting to make her appearance. Rita Frances Colangelo was born minutes later. This afterthought baby would work hard, raise a family and lead an exemplary life for nearly 91 years before her death on September 30, 2021. Rose and Rita were on the older end of a family of 11 children, including a second set of twins born 10 years later. They were celebrated in the local paper for graduating George Washington High School with honors and both attended secretarial school. Rita had a Top Secret clearance for her work at the Pentagon for the Air Force, which entailed updating, by hand, large volumes that listed landing strips around the world. On a girl’s trip to Virginia Beach, she caught the eye of a handsome sailor, Peter Ginter. After a long-distance relationship, they married in 1954 and settled in her hometown. Peter was a little disappointed to discover that the yellow convertible Rita shared with her twin didn’t come with the marriage. Money was tight. He would land a job as an airline mechanic’s helper, but always had his eye on moving up, first as a gate agent and then at the ticket counter. A child, John, soon appeared followed by three others. Rita would spend the next 30-plus years seeing to their care and feeding as well as a large dose of moral schooling via the example of unwavering Catholic faith. She also believed in the value of working hard and education. She would return to the world of work in order to pay her children’s college expenses, allowing them to graduate without debt — although all were expected to contribute enough each year to cover their (mercifully cheap) state university tuition and books. Rita’s extended family was large and close knit — ultimately, four siblings and her parents lived within walking distance of her Northern Virginia home. That would change in 1970 when Peter was promoted to serve as district sales manager for Japan Airlines in Miami, Florida. Uprooting her family and moving a great distance from her hometown was scary and difficult, but kind neighbors pointed her in the direction of schools, grocery stores and banks. The sunny weather and palm trees also attracted visitors over the years, including extended visits from her mother and mother-in-law during the winter months. Peter Ginter was diagnosed with lung cancer in 1986 and Rita quit work to care for him until he passed away 18 months later. 1992 was a very bad year. Her house was burglarized and a month later, Hurricane Andrew would destroy the house and most of her belongings. She later sold the house as-is and decamped to a large adult community near Fort Lauderdale, where she lived for several years. During that time, she was courted quite romantically by Peter Petrowicz and they were married in 1994. After the wedding, they traveled together. Unfortunately, he would fall ill and she would care for him until his death. She ultimately decided to return to Virginia to live in an apartment a few steps away from Rose in the same adult living complex. Reunited, the twins would enjoy each other’s company and avail themselves of all the experiences offered in the sprawling campus for the next decade. Three years ago, Rita moved to Tallahassee to be closer to one of her far-flung children, Rosanne Dunkelberger. She would live the last two years of her life in Rosanne’s home, giving them both a taste of the physical closeness they had not experienced throughout the years. Rita was predeceased by her two husbands and her parents, as well as sisters Clara Gorham, Janet Canane and Mildred Kerns, and brother Joseph Colangelo. One does not make through nine decades of life without outliving many people and she was greatly saddened by the passing of all her close friends and as well as other dear relatives. She is survived by her children and their spouses: John Ginter, Rosanne (Lloyd) Dunkelberger, David (Lynn) Ginter and Christopher (Susan) Ginter; as well as six grandchildren, Jay (Raina) Dunkelberger, Veronica (Ben) Schultz, Peter (Jessica) Ginter, Ana Ginter, John David Ginter and Laura Ginter. Her two great grandchildren — Roderick Dunkelberger and Vivian Schultz — were born in 2020. Other survivors include her twin, Rose Fiorello, as well as siblings Margaret Clifford, John David Colangelo, James Colangelo, Jane Selby and Steven Colangelo. A memorial mass will be held at Good Shepherd Catholic Church of Tallahassee on Friday, October 22, 2021 at 11:00 a.m. She will be buried with her husband, Peter (the first one) Ginter in Arlington National Cemetery. Memorial donations may be made to either St. Jude Children’s Research Hospital (stjude/donate.org) or Good Shepherd Catholic Church (4665 Thomasville Road, Tallahassee 32309). Breanna Green of Bevis Funeral Home is assisting the family with their arrangements. (850-385-2193 or www.bevisfh.com)

On October 14, 1930, Rose Marie Colangelo was delivered at home in Alexandria, Virginia by her Italian immigrant grandmother. She was the third daughter of Virginia and Domenico Colangelo. The happiness surrounding the new arrival was interrupted,... View Obituary & Service Information

The family of Rita Frances Colangelo Ginter Petrowicz created this Life Tributes page to make it easy to share your memories.