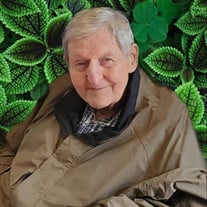 He lived big, but he loved bigger! Robert (Bob) Patrick O’Connell died peacefully with his daughter, Cynthia, at his side in Bradenton, FL. and with his Rosary securely in his hands. On Jan. 17, 2021, his prayer to be reunited with his wife was granted. Bob was born May 26, 1930, on the Southside of Chicago, Ill. He was an accomplished athlete and multi-year captain in football and wrestling at Tilden High School where he was honored with the Noble G. Kizer – Most Valuable Player award in 1947. Following graduation, he accepted a football scholarship to Indiana University. When his line coach was recruited by a recently transformed all-women’s college, he asked Bob and two teammates if they’d like to, “move to sunny Florida where the ratio of women to men was 10:1”? He immediately packed his bags for Tallahassee, FL, enrolled in Florida State University, pledged Phi Delta Theta, and rarely looked back! In 1950, he played as a center on FSU’s first undefeated football team, winning the Dixie Conference, and becoming the first team to play at Doak S. Campbell stadium. While at FSU he met the love of his life, Juliette (Julie) Mary Demetree. On Feb. 1, 1954, the day after his graduation, Bob and Julie were married at Blessed Sacrament Catholic Church. They were married 65 years and together raised six children. Bob was proud to have served his country in the Army for two years during the Korean War. Like Julie, his faith was the most important part of his life, followed by his love for her, their children, grandchildren, and great-grandchildren. An exceptionally hard worker and charismatic salesman, Bob was a shareholder in Tallahassee Grocery Company and was loved by his clients. His passions were everything Irish and FSU! The annual O’Connell St. Patrick’s Day parties and legendary FSU tailgates were as lively as he! When FSU played badly, he was perceived as a big, loud bear. In reality, he was a big teddy bear who appreciated any kind gesture made toward him, Julie, or his children. He was grateful for and very fond of Julie’s large, extended family who treated him as both family and close friend. When not working, his time was primarily devoted to his children and their many and varied activities. On Sundays ensuring their religious education and attending Mass was his top priority. Additionally, he was a member of FSU’s Varsity Club and the Rotary Club. Bob was predeceased by Julie; his parents, Mae and Harry O’Connell, and his sister, Alice O’Connell Klem. Also, his beloved son-in-law, William (Bill) D. Brinton, his in-laws, Mr. & Mrs. George H. Demetree, and his brother and sister-in-law George (Sonny) and Ruth Demetree. He is survived by his children, Cathy Brinton, Cynthia Finney (Mark), Michael O’Connell, Juliette Riley, Lisa Christopher (Reid), and Patrick O’Connell (Susan); 11 grandchildren, Quinn (Bob’s mother’s maiden name), Suzanne, Caroline, Leslie, Ju¬lianna, Haley, Wade, Ryan, Peter, Sarah Catherine, and Sean; 13 great-grandchildren, brother-in-law Mike Klem, nephews Pat and Joe Klem, and many cousins, nieces, and nephews. Pat, Bob, Dad, Daddy, R.P. and Papa is dearly missed. A Mass in celebration of his life will be held Saturday, April 17, 11:00 a.m. at Good Shepherd Catholic Church. In lieu of flowers, the family requests donations made in his honor to Catholic Relief Services, P.O. Box 17090, Baltimore, MD, 21297-0303 or Special Olympics Manatee County, 3657 Cortez Rd. W. Suite 120 Bradenton, FL 34210.

He lived big, but he loved bigger! Robert (Bob) Patrick O&#8217;Connell died peacefully with his daughter, Cynthia, at his side in Bradenton, FL. and with his Rosary securely in his hands. On Jan. 17, 2021, his prayer to be reunited with his... View Obituary & Service Information

The family of Robert (Bob) Patrick O'Connell created this Life Tributes page to make it easy to share your memories.

Send flowers to the O'Connell family.