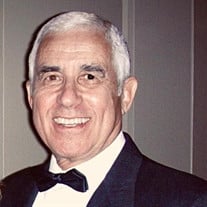 Robert (“Bob”) Vincent Russo, Sr., 86, of Tallahassee, passed away on Saturday, November 6, 2021. He was married to Mary Ann (Bryant) Russo for 60 years. Born in New York City, Bob was a 1956 graduate of Rensselaer Polytechnic Institute, Troy, New York, where he received a bachelor’s degree in Mechanical Engineering and master’s degree in Management in 1957. During his three years of military service, Bob was a member of the Air Force’s F-105 weapons test team at Eglin Air Force Base in Florida and at Republic Aviation in Farmingdale, N.Y. where he represented the Air Force Research and Development Command. Upon completion of active duty in 1960, Bob joined the IBM Corporation where he worked in manufacturing, engineering, development, and marketing for over 20 years. While at IBM he authored several engineering papers and software programs and led the development of early on-line medical systems for physiological monitoring, patient care and administration. Later at IBM, he led the development and installation of the ﬁrst automated teller and other banking systems, and directed marketing programs in the ﬁnance, government, education and medical industry sectors. Near the conclusion of his IBM career, Bob coordinated federal executive education programs and numerous recognition events. In 1981 Bob left IBM and, with a small group of like-minded Christian brothers, helped form Orange Systems, a Gaithersburg, MD, computer technology company, where he worked for 16 years as Vice President and Director, leading business systems, both federal and commercial user support and maintenance and network training divisions. Bob brieﬂy retired in late 1997, but returned to work in January 1998 as Senior Vice President for Professional Education at Launchspace, Inc., a space technology company headquartered in Bethesda, MD. After 16 enjoyable years of guiding the training for thousands of space professionals world-wide, Bob retired from Launchspace in December of 2014. In 2018, living in a large home in Mt. Airy, MD, with too much property to handle, Bob and Mary Ann downsized to a patio home in the senior community at Homewood of Frederick, MD. In 2021, Bob and Mary Ann moved to Tallahassee, FL to live near their son, Robert “Vince” Russo and his family. Bob enjoyed baseball, particularly as an active player in the Ponce de Leon senior league, where he played an enthusiastic second base until age 65. He was an avid reader of history and spy thrillers and wrote a series of unpublished adventure books for his grandchildren. Bob was an only child and had no surviving relatives other than his immediate family. Bob had a steadfast faith and trust in Jesus Christ as Lord. In addition to his wife, survivors include his children, Robert Jr (wife Jackie), Michael (wife Kathy), and Robin (husband Paul O’Donnell) and his grandchildren, Stone and Josie Russo, Matt Russo and Bobby, Tommy, Erin, and Audrey O’Donnell. He loved the many friends who worshipped with him over 45 years as members of Mother of God Community in Gaithersburg, MD, Triumph of the Cross Community in Frederick, MD, and St. Katherine Drexel Catholic Church in Frederick, MD. The family will receive friends from 11:30AM until 12:00 noon on Wednesday, November 10, 2021, at Blessed Sacrament Catholic Church, 624 Miccosukee Road, with the Funeral Mass immediately following at noon. The service will be livestreamed at https://m.facebook.com/BSCTallahassee/. Interment will be at 2:00PM at Tallahassee National Cemetery, 5015 Apalachee Parkway. Kelly Barber of Bevis Funeral Home (850-385-2193 or www.bevisfh.com) is assisting the Russo family with their arrangements.

The family of Robert "Bob" Vincent Russo, Sr. created this Life Tributes page to make it easy to share your memories.

Send flowers to the Russo, family.