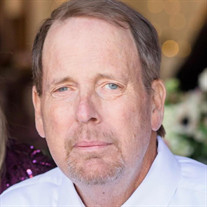 Robert Alan Day 53, of Tallahassee passed away March 30, 2022, after a lengthy illness. He was born on May 20, 1968, in Columbus, Georgia to the late William Jackson Day and Diane Day Brim. Robert spent most of his early years in Florence, Alabama and later moved to Tallahassee, Florida. He attended school at Cobb Middle School, Rickards High School, and graduated from Lively Education. Robert was a hard worker and all his working years were spent in the heating and air conditioning field. Because of his work ethic, he advanced to Field Supervisor at Locke’s Heating and Air, where he worked for over 25 years. He loved the work and being able to help others. As a result, he expected perfection from those working beside him. Robert had a passion for the game of Baseball. When his boys became old enough, he spent every moment he could with them at Winthrop Park. He spent endless hours coaching many teams and shaping countless boys into the fine young men that they are today. In 2017, Robert had to step away from coaching due to his declining health, but it never left his thoughts. He tried for the last five years to get back to that “Red Clay”, but unfortunately his health would not allow it. He is survived by his loving and devoted wife of 18 years Dania Day; his three children Robert “Robby” Day Jr. (Nicole), Ryan Day (Hannah), and William “Austin” Day; siblings Jo Anne Caldwell of Athens, AL, Jeff Day (Kathy) of Athens, AL, Jimmy Day (Katrina) of Rogersville, AL, Michael Day (Christine) of Tallahassee, FL, and Jennifer Melodia (Matt) of Tampa, FL; sisters-in-law Linda Day of Florence, AL, Amy Detweiler (Boomer) of Denver, CO; mother-in-law Wynell Dupree of Tallahassee, FL; two precious grandsons Robert Alan “Tripp” Day III and Levi Kerrigan Day; numerous nieces and nephews. In addition, all his friends through the years, Don Waters, Dean Waters, Bill Ringe, Matt Benson, Mike Sellers, Casey Daffin and the late Berry Brown. Lastly, Robert’s baseball players and their families held a special place in his heart. He had great pride seeing you succeed on and off the baseball field and loved each and every one of you. Our family wants to extend our sincerest appreciation to Dr. Gian-Carlo Giove and Dr. Cielo Rose for their extraordinary love, care, and compassion for Robert over the last 5 years. Robert’s wishes were that any former players of his wear their jerseys to the service. Services will be held at Bevis Funeral Home Sunday, April 3, 2022. The family will receive visitors from 12:00-1:00 followed by the funeral service at 1:00pm. Burial will follow directly after the funeral at Tallahassee Memory Gardens. In lieu of flowers donations may be made to the Robert Day Memorial Fund in c/o The First Bank for a future memorial project at Winthrop Park. Jared Padgett of Bevis Funeral Home is assisting the family with their arrangements. (www.bevisfh.com 850-385-2193)

Robert Alan Day 53, of Tallahassee passed away March 30, 2022, after a lengthy illness. He was born on May 20, 1968, in Columbus, Georgia to the late William Jackson Day and Diane Day Brim. Robert spent most of his early years in Florence, Alabama... View Obituary & Service Information

The family of Robert Alan Day created this Life Tributes page to make it easy to share your memories.

Send flowers to the Day family.