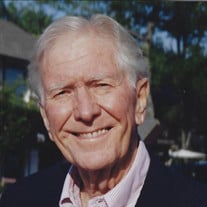 Robert C. "Bob" Lee passed away unexpectedly on March 12, 2021, after a brief illness. His devoted wife, Mary, was by his side. He was 92. Bob was born August 1, 1928, in Dayton, OH. After his childhood days, he and his mother moved to Miami, FL. Bob graduated Miami Edison High School in 1947, where he was a cheerleader, a member of the Glee Club and was voted "Peppiest." He was a member of the Miami Edison High School Over-The-Hill Gang. Bob served as Master of Ceremonies for numerous reunions of the Over-The-Hill Gang. He always kept the program moving and the crowd laughing. Bob's initial professional career was with Southern Bell Telephone. In 1962, he became Manager of Personnel and Public Affairs at the Sugar Cane Growers Cooperative in Belle Glade. Union organizers targeted the Cooperative several times. Bob was instrumental in keeping the Cooperative non-union. In 1971, he joined United States Sugar Corporation. Bob was Vice President for Personnel and Community Affairs, which included lobbying on behalf of the sugar industry in both Tallahassee and Washington, DC. He was affectionately known as "Sugar Bob" and was once awarded Lobbyist of the Year by his peers. He retired in 1992. His past affiliations include the Belle Glade Chamber of Commerce (President), the Clewiston Chamber of Commerce, the Palm Beach County Board of Adjustment and Zoning Commission, the Management Research Institute (President and Chairman of the Board), Agribusiness Institute of Florida (President), Associated Industries of Florida (President) and was a Board Member of Florida Tax Watch, Florida Self Insurers Guaranty Association, Florida Community Education Foundation, National Council of Agriculture Employers and the Economic Council of Palm Beach County. He was Director Emeritus of The Farm Foundation, Inc. Bob was the consummate gentleman, outgoing and friendly. Consequently, he was richly rewarded with many friends. During his life, Bob made an impact on the lives of many young people through his professional affiliations. He was formerly a Florida State Golden Chief and enjoyed FSU football. Bob was a past member of the Tallahassee Harley-Davidson motorcycle club. He and Mary rode his Harley to many rallies, on the back roads of Tallahassee and through the hills of GA and NC. Bob had sung in several barbershop quartets and at one time was an excellent dancer. He enjoyed good fried chicken, grilling, singing, reading and driving all over the country with Mary. Bob and Mary owned a home in Sky Valley, GA, for fourteen years where they stayed April-October. Bob is survived by his wife and care giver of almost twenty-six years, Mary Caldwell Lee, his son Terry Lee (wife Mary), two daughters, seven grandchildren, seven great-grandchildren, brother-in-law Thorne Caldwell (wife Diana) and their children. He was preceded in death by his mother Geneva Marie Ferguson Lee, half-sister Geneva "Ginny" Wilson, granddaughter Lindsay Paulson, in-laws Stan and Nita Caldwell, sister-in-law Courtney Caldwell and the mother of his children, Ranelle Stanley Duncan. A private burial will be held at Roselawn Cemetery. The ashes of "the old man from the far away hills," as Mary used to call him, will be interred by Mary's future resting place. Vince Gill sings, "Go rest high upon that mountain. Son your work on earth is done." Bob is resting upon that mountain in eternal peace. Bevis Funeral Home is handling the arrangements. In lieu of flowers, Mary suggests donations could be made in Bob's memory to the Florida Sheriffs Youth Ranches, Inc., PO Box 2000, Boys Ranch, FL 32064. Rocky Bevis of Bevis Funeral Home of Tallahassee (850/385-2193 or www.bevisfh.com) is assisting Mrs. Lee with her arrangements.

Robert C. "Bob" Lee passed away unexpectedly on March 12, 2021, after a brief illness. His devoted wife, Mary, was by his side. He was 92. Bob was born August 1, 1928, in Dayton, OH. After his childhood days, he and his mother moved to Miami,... View Obituary & Service Information

The family of Robert C. Lee created this Life Tributes page to make it easy to share your memories.

Send flowers to the Lee family.