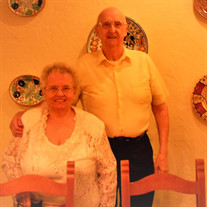 Robert Thomas Paré, Jr., of 1009 Concord Road, Tallahassee, died in his sleep Tuesday morning, July 27, 2021, after a long illness. He was born on July 2, 1936 to Robert T. Paré, Sr. and Estelle (Brulé). He attended Holy Family School and St. Dominic Regional High School in Lewiston, Maine, attending high school for one year and getting his GED later in life. The oldest of four siblings, he quit school to take a job and help support his family. He worked in various businesses throughout his career, including the Hill Mill, the local gas company, and Lewiston Hardware. He served in the U.S. Army from 1958 to 1961 as a military policeman. While on the Lewiston Police Force, he met the love of his life through a coworker, who became an uncle-in-law when he married Eileen Indrysek on May 7, 1966. Finally came Canteen Company of Maine, which saw him drive a company vehicle in a severe accident in 1972 that would almost kill him. A devoted Catholic, he was given Last Rites on the scene. Robert, sometimes known as Bob or Bobby, had a daughter, Louise, born on February 14, 1967. The family moved to Leesburg, Florida in 1985, hoping for improvements to their health. Other moves were to Wildwood, then Tallahassee in 2006. Robert was a 4th Degree member of the Knights of Columbus, a member of the Disabled American Veterans, and a member of the American Legion, taking positions of leadership in some of these groups. In his active years, he enjoyed family barbecues, cards, and watching television with his family. In later years, he looked forward to Father-Daughter Day every Friday, when he would watch his daughter's favorite DVDs with her over subs or pizza. Except for the very end, when he was under in-home hospice care, he said at least one rosary every day. He is survived by daughter Louise Lobinske and her husband Richard, sister Sue Bechard of Lewiston, Maine, nieces, nephews, and cousins. He was predeceased by his wife Eileen, his brothers Richard and Raymond, and his parents. Viewing will be at Bevis Funeral Home August 3, 6 pm to 8 pm, and August 4, 2 pm to 4 pm and 6 pm to 8 pm. The funeral Mass will be held at Blessed Sacrament Catholic Church at 11 a.m. on August 5, with interment at the Tallahassee National Cemetery at 1 pm. All who knew Bob are invited to attend. Kelly Barber of Bevis Funeral Home (850-385-2193 or www.bevisfh.com) is assisting the family with their arrangements.

The family of Robert Thomas Pare, Jr. created this Life Tributes page to make it easy to share your memories.

Send flowers to the Pare, family.