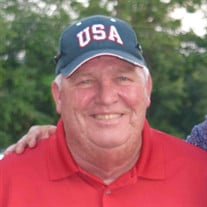 Roger Dale McKenzie, life-long resident of Tallahassee, Florida passed away Thursday, October 15, 2020 at the age of 73. Roger is survived by his wife Margie (Halstead) McKenzie; his daughter Amy McKenzie of Chattanooga, TN; his son Wesley McKenzie (Susan) of Thomasville, GA; his granddaughters Lily, Lia and Laina McKenzie of Thomasville, GA; his sister Vicki Goins (Bob) of Tallahassee, FL; and his brother Vince McKenzie (Angie) of Tallahassee, FL. He is preceded in death by his parents. Roger was born to Vernon McKenzie and Elizabeth Strickland McKenzie on February 22, 1947. He graduated from Leon High School in Tallahassee in 1965. Roger enlisted in the United States Navy in 1965 and served four years, being honorably discharged in 1969. In 1970 Roger married Margie N. Halstead. Roger and Margie had two children, Amy, born September 15, 1972 and Wesley, born November 13, 1977. Roger was an avid sports competitor and fan. Growing up he had a passion for baseball and became an all-star pitcher for the Leon High School Lions and the American Legion Baseball League, holding many pitching records and winning many awards for his accomplishments on the mound. He developed a love for the game of golf early on and joined the U.S. Navy Golf Team while in the service. Roger was well-known for his talent on the golf course and was a coveted team member in any tournament. Even at the age of 73, Roger was a scratch golfer consistently besting players half his age. Roger also served the Tallahassee sports community for many years as a softball umpire and referee for basketball and football. Roger was a die-hard Florida State Seminole fan as well and for decades regularly attended football, basketball and baseball games cheering on the Seminoles. Roger spent 42 years in the automotive sales industry working as a top salesman for Tallahassee Ford, Palmer Harrell Buick, Champion Chevrolet and later Bob Hobson Chevrolet in Cairo, Georgia. One of his greatest joys was helping individuals and families in the car business. His friendly and honest way of doing business made lifelong friends and lifelong customers. Roger grew up as a member of the Tallahassee Branch Street Church of God and later joined Evangel Assembly of God where he faithfully attended until his passing. He loved the church and loved his family. Later in life, Roger’s pride and joy became his three grandchildren, Lily, Lia and Laina, regularly cheering them on in their various sports events and activities. Roger was a loving husband, father, grandfather, brother and friend whose legacy of love, kindness and compassion will continue to make an impact in countless individuals.

The family of Roger Dale McKenzie created this Life Tributes page to make it easy to share your memories.

Send flowers to the McKenzie family.