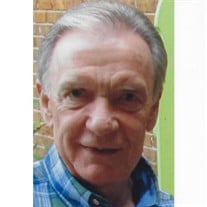 Ronald K. Gressel, 81, entered Heaven on April 18, 2021 after peacefully reciting the Lord’s Prayer, the 23rd Psalm and asking God’s forgiveness. He was born in Columbus, Indiana to parents Herbert and Stella Gressel on March 27, 1940. Ronald entered the United States Air Force in 1963 as a reservist and was released from active duty in 1969 after serving his country during the Vietnam War. He was the only reservist in 1968 to be awarded Airman of the Month at Lockbourne Air Force Base. Ronald graduated from Union College in Barbourville, Kentucky and earned his Bachelors in business with a major in accounting. He dedicated 37 years to the Federal Highway Administration as a financial manager, transferring to Tallahassee in 1974. All of his adult life, Ron was a huge Nascar fan. An avid runner with Gulf Winds Track Club in his 40s, 50s and 60s, he was named as the champion runner of his age group in 1992. After retiring from the FHWA, he “enjoyed” gardening with his wife Linda while closely following her directions and chasing around his countless grandchildren. In his 50s, he and Linda welcomed their young granddaughters, Brittany Gressel and Alexis Bodiford, into their home to raise as their own so they could once again enjoy Saturday morning softball games and endless school activities. No matter where he was in life, however, he always wanted to help anyone who needed him. His warmth and compassion will be remembered and missed by many. Ronald leaves behind his loving wife, Linda Garrett Gressel; the mother of his children, Helen O’Brian Gressel; his son, Mark B. Gressel; his stepdaughters Dianna Aman of Tallahassee, FL, Sherie Dice (Billy) of Perry, FL, Angela Aman and Camille Taylor of Jacksonville, FL; brothers Rev. Daryl Gressel (Diana) of Columbus, IN and Dwight Gressel (Barbara) of Springfield, MO; daughters-in-law Helen Lenartis and Holly Gressel of Tallahassee, FL. He is also survived by many grandchildren and great-grandchildren who will miss him dearly – most notably, Bentley, with whom he had an incredibly special bond. He is predeceased by and now reunited with parents Herbert and Stella Gressel; sons Matthew and Michael Gressel; siblings Gloria Sue Webb and Eric Gressel. The family will be receiving guests for a visitation at Bevis Funeral Home of Tallahassee on Thursday, April 29, 2021 at 10:30 a.m. to be immediately followed by a memorial service at 11:00 a.m. Interment will be held at Tallahassee National Cemetery once memorial services have concluded. Breanna Green of Bevis Funeral Home is assisting the family with their arrangements. (850-385-2193 or www.bevisfh.com)

The family of Ronald K. Gressel created this Life Tributes page to make it easy to share your memories.

Send flowers to the Gressel family.