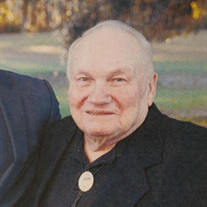 Rufus Walter “Jim” Griffin, Jr., 88, passed away August 6, 2021 in Tallahassee, Florida. He is survived by his wife of 67 years, Jeanne Griffin. Jim was born on July 29, 1933 in Mystic, Georgia. A graveside funeral will be held on Tuesday, August 10, 2021 at 11:00 a.m. at the Woodville Cemetery behind the White Church. Jim graduated Florida High School in 1953 and was drafted into the Korean War. He proudly served in the Army from 1953-1955. Jim was a Remington machines repairman. Jim was an avid hunter and fisherman spending every possible weekend doing what he loved as long as his health allowed. In later years, he also loved riding in the woods just about every day looking for game and then detailing to his family what he saw on his rides. “Father Dear”, as he was fondly called, was a strict disciplinarian and often used raking the yard as a punishment when one his daughters got in trouble. He was also famous for having huge cookouts on his Coleman stove at Granny Clemons store in Woodville in the late 1960’s -70’s. He was a master TV remote controller and hit the mute button constantly and usually at the time when something good was about to happen especially during FSU Football games. Jim also loved going to the mountains with his favorite girl, Jeanne. They went every year for many years during the Fall, with his favorite place being Gatlinburg, Tennessee. Survivors include his high school sweetheart, Jeanne Griffin; two daughters Rene (Michael) Barrett, Carol (Jerry) Douglass; and his sister Susie (John) Alday. He leaves behind five grandchildren, Cody (Kristin) Baggett, Kendall Harrell, David Harrell, Bella Douglass and Jennifer Bell. He also leaves behind eight great-grandchildren and several nieces and nephews. Jim is preceded in death by his parents, Rufus Walter Griffin, Sr., and Della Revel; and his daughter Anne Shivers. Jim is also preceded in death by his three sisters, Madelyn Whaley, Dolores Robertson and Shelby Calhoun. In lieu of flowers, the family requests that memorial donations be made to Big Bend Hospice, 1723 Mahan Center Blvd, Tallahassee, FL 32308. Kelly Barber of Bevis Funeral Home (850-385-2193 or www.bevisfh.com) is assisting the Griffin family with their arrangements.

The family of Rufus Walter "Jim" Griffin, Jr. created this Life Tributes page to make it easy to share your memories.

Send flowers to the Griffin, family.