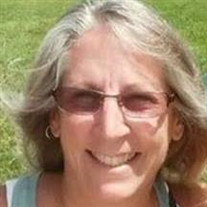 Ruth A. (Lamprey) Houser, 61, resident of Tallahassee, FL and native of North Andover, MA passed away on Saturday, October 30, 2021. She was surrounded by her family at the end of her 12-year battle with breast cancer. She was born on November 25, 1959, in Bossier City, LA to Paul and Madeline J. (Finn) Lamprey. She was raised in North Andover, MA. After serving in the United States Air Force as a military club manager, she worked for years as a public-school cafeteria manager until she was finally able to pursue her lifelong dream of becoming a Family and Consumer Sciences (Home Economics) teacher. She taught in the Brevard County school system in Florida and the Portsmouth School District in Portsmouth, New Hampshire. She enjoyed arts and crafts, sewing, and camping with her family. She loved cheering on all Boston sports teams. She is preceded in death by her father, Paul Robert Lamprey who passed away in 2001. She is survived by her husband of 39 years, Warren “Les” Houser, her mother Madeline J. (Finn) Lamprey, and her two daughters, Cara (Houser) Garrett and her husband Thomas and Erin (Houser) Lawson and her husband Robert; and five grandchildren, Robert, Elliott, Everett, Samantha, and Emmett. She is survived by her five siblings, Patricia VanAnglen, Diane O’Connor, Paul Lamprey, Nancy Gallagher, and William Lamprey. She is also survived by many nieces and nephews. Relatives and friends are invited to call on Thursday November 11, 2021 from 4-7pm at Conte Funeral Home, 17 Third Street North Andover, MA, 01845. A funeral mass will be offered on Friday November 12, 2021 at 10:00am at St. Michael Parish, 196 Main Street North Andover, MA 01845 and a burial with military honors to follow at Ridgewood Cemetery. In lieu of flowers, the family requests donations made to the Seacoast Cancer Center in honor of Ruth Houser. Donate at https://giving.wdhospital.org/ and select the Seacoast Cancer Center as the Designation. Kelly Barber of Bevis Funeral Home (850-385-2193 or www.bevisfh.com) is assisting the Houser family with their arrangements.

Ruth A. (Lamprey) Houser, 61, resident of Tallahassee, FL and native of North Andover, MA passed away on Saturday, October 30, 2021. She was surrounded by her family at the end of her 12-year battle with breast cancer. She was born on November... View Obituary & Service Information

The family of Ruth Anne Houser created this Life Tributes page to make it easy to share your memories.

Send flowers to the Houser family.