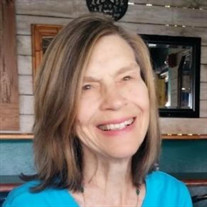 Sally Ann Stanback Malloy left this world on January 14, 2022, after a long and beautiful life, having touched too many people to mention with her kindness, her independence, and her ever-present compassion for others. Her three daughters, Sarah... View Obituary & Service Information

The family of Sally Ann Stanback Malloy created this Life Tributes page to make it easy to share your memories.

Send flowers to the Malloy family.