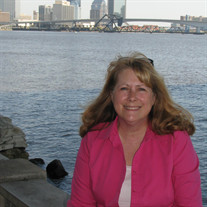 Sally Kay Ayres, 66, passed away on March 28, 2022, due to a suspected heart attack. Kay, as she preferred to be called, or Mimi, as she loved being called by her beloved grandchildren, is survived by her husband of 31 years, Carl Travis Ayres. Kay and Carl moved to Tallahassee in 2013 to be near her son, Jared Scott Gardner (43), daughter-in-law, Victoria Mary Gardner (37), and their five children: Genevieve Shiloh Dorthea Gardner (12), Elijah Richard Ozro Gardner (12), Zane Kirkpatrick Gardner (9), Emmeline Hansina Gardner (9), and Asher Joseph Gardner (6). Kay was born in Jacksonville, Florida in 1956, and later moved to Salt Lake City, Utah with her mother, Sarah (Sally) Buhler (Schroeder), adoptive father, Ray J. Buhler (deceased), and her younger siblings: Kelly Buhler, James Buhler, Rod Buhler, Craig Buhler (deceased last year) and Mark Buhler. Her sister, Cyndi Buhler (Licausi), was born after the move. Kay graduated from Murray High School in Murray, Utah. She also worked at the Church Office Building in downtown Salt Lake City. In Utah, Kay met and fell in love with Richard L. Gardner (deceased) who she married in 1977 in the Salt Lake City Temple of the Church of Jesus Christ of Latter-day Saints. In 1978, Kay gave birth to her son, Jared Scott Gardner. In 1983 the young family moved to Ypsilanti, Michigan where Richard took a job in management with the Ford Motor Company. Kay studied at Washtenaw Community College. While in Michigan, Richard was diagnosed with cancer to which he succumbed in 1988. After Richard’s death, Kay and Jared moved to Jacksonville, Florida to be close to family. In Jacksonville, she met and fell in love with Carl Travis Ayres whom she married September 9, 1990. Carl is a retired navy veteran and worked as a computer specialist on the NAS Jacksonville base until his retirement in 2013. Kay and Carl loved to travel together (especially to the beach) and enjoyed many trips with their close friends and family. Kay obtained her certificate as a medical assistant and worked in a doctor’s office in Orange Park, Florida. Later in life, Kay was grateful to get to know her father Paul Webb (since deceased), his wife, Marilyn Webb, and Kay’s brothers Bryan and Mark Webb. Kay loved being a mother and a grandmother. She went out of her way to make each day special. Every holiday she used her talents for baking and decorating to turn her house into a magical wonderland. Mimi would do her best to outdo the Easter Bunny and Santa Clause and make each child feel cherished. Kay loved to travel and was the organizer of family trips, who would push her family out of their normal routine in order to make lasting memories. She made it her mission to be there for every milestone and was completely adored by her five grandchildren. Kay was a light to those around her, and an example of Christ-like love. She kept in touch with those from every chapter of her life, and freely offered support and encouragement. She enjoyed performing compassionate care through her church by arranging for meals and assistance for those in need or those suffering loss. Kay leaves behind a legacy of family and friendships and will be dearly missed. Kay always said “Family is Everything,” and she was the heart of it. In lieu of flowers, the family requests donations to be made to the American Heart Association. for those wishing to view her service via zoom the link is: https://zoom.us/j/5167663549?pwd=aTBIamczb3l2RUYwVW5FQXVBdGRPUT09 Todd Wahlquist with Bevis Funeral Home (850-385-2193, www.bevisfh.com) is assisting the Ayres family with their arrangements.

Sally Kay Ayres, 66, passed away on March 28, 2022, due to a suspected heart attack. Kay, as she preferred to be called, or Mimi, as she loved being called by her beloved grandchildren, is survived by her husband of 31 years, Carl Travis Ayres.... View Obituary & Service Information

The family of Sally Kay Ayres created this Life Tributes page to make it easy to share your memories.

Send flowers to the Ayres family.