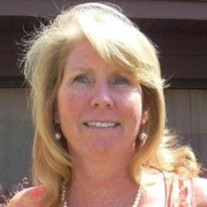 Sally Ann Golden-McCord was a loving mother, caring sister, and devoted social worker. She passed away suddenly at home in Tallahassee, Fla. on July 25, 2021 at age 58. She is survived by her two daughters, Erin (Tampa, Fla.) and Morgan McCord (Copenhagen, Denmark), her sisters, Lori Golden (Atlanta, Ga.) and Susan Crum (David) (Chattanooga, Tenn.), many nieces, nephews and friends, and the father of her children, William “Bill” McCord (Gallatin, Tenn.). Sally was born to Joseph and Phyllis “Joan” Golden on September 3, 1962. She grew up in Satellite Beach, Fla. and in 1983 graduated from Florida State University where she joined Alpha Delta Pi sorority and was a permanent fixture on the Dean’s List. She passed her enthusiasm for learning and values of personal growth, commitment, and service to others to her daughters, along with her love of running and appreciation for the outdoors. She even shared her sisterhood with her daughter Erin, who became her sister in Alpha Delta Pi in 2015. As a mother, Sally was her daughters’ biggest supporter. She held them to the highest standards and always expected their best efforts at school and in life. She encouraged their love of dance and was an energetic “dance mom.” She nurtured their passions, and always believed in their goals and dreams. She also raised her daughters to know and love Jesus. She was very proud of her daughters; they are her enduring legacy. Sally spent her professional career as a dedicated advocate for children, especially within the disability community. She served as a social worker for Florida’s Early Steps program for 17 years and most recently at Healthy Families Florida. Sally’s passion for children also led her to serve as a volunteer in children’s programs at her lifelong churches - Killearn United Methodist Church, where she taught Sunday School, and Rockledge United Methodist Church, where she led Vacation Bible School. She was also a girl scout troop leader for both her daughters’ troops. A memorial service celebrating Sally’s life will be held at Killearn United Methodist Church in Tallahassee on Saturday, August 7, 2021 at 2:00 p.m, followed by a visitation with her family. In lieu of flowers, please donate to the Florida State University Center for Autism and Related Disabilities in memory of Sally. https://one.fsu.edu/foundation/donate/college/medicine/donation-form?fid=vD1u8UfRHxk%3D&fdesc=ac7QUOasgUFytWxKuLkhctr%2FpeQ62gAN2EsTGU74L5%2B8qWRFqiJJYw%3D%3D Susie Mozolic of Bevis Funeral Home is assisting the family with their arrangements. (www.bevisfh.com 850-385-2193)

Sally Ann Golden-McCord was a loving mother, caring sister, and devoted social worker. She passed away suddenly at home in Tallahassee, Fla. on July 25, 2021 at age 58. She is survived by her two daughters, Erin (Tampa, Fla.) and Morgan McCord... View Obituary & Service Information

The family of Sally Ann Golden-McCord created this Life Tributes page to make it easy to share your memories.

Sally Ann Golden-McCord was a loving mother, caring sister, and...

Send flowers to the Golden-McCord family.