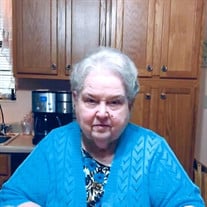 On April 17, 2022, Sandra Ann Spears Davis passed away peacefully at her home in Crawfordville, Florida. She was 76 years old. Sandra is survived by her husband of 57 years, Jeffrey Phillip Davis, her two daughters, Marcia Spivey of Crawfordville,... View Obituary & Service Information

The family of Sandra Ann Davis created this Life Tributes page to make it easy to share your memories.

Send flowers to the Davis family.