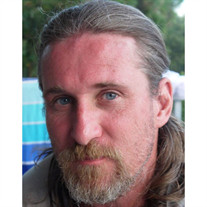 Shawn Anthony Nixon was born September 15, 1975, in Los Angeles, CA. He graduated from Kalaheo High School in Kaneohe, HI in 1994, where he was a two-time State Champion in Cross Country, and won State Championships in both the 1600 and 3200 meter Track and Field events. Upon graduating high school, Shawn left Hawaii on a full athletic scholarship to Tulane University in New Orleans, LA for Cross Country and Track. After two promising years at Tulane, Shawn transferred to Adams State College in Alamosa, CO, where he was a two-time All-American in cross country, and finished 4th in Nationals, leading the way to ASC being crowned the 1998 National Champions. Following graduation, he spent time in Colorado, Michigan, Ohio and Florida. Shawn was loved and admired by everyone he met, and left a lasting impact on countless people. Shawn was known for his huge heart, grit, and perseverance. He loved the outdoors, becoming an avid rock climber during his years spent in the beautiful Colorado Rocky Mountains. Shawn would often say he felt closest to God while he was in nature, surrounded by the beauty and mystique of creation. Shawn was also an accomplished artist, having majored in Art, and spent time in the classroom as an art teacher. Shawn will be remembered by his family as fiercely loyal — he always put his family first, and was the first to jump into action when his loved ones needed help. Shawn was a good time to be around...his infectious laugh, knack for telling incredible stories of his many life adventures, and his thoughtful ability to listen when he was in a conversation. Shawn is survived by his son Owen, the apple of his eye, the center of his world, and the greatest gift Shawn would say he has ever received. Shawn spent the final 11 years of his life making sure his son was cared for and affirmed. Not a single day went by which he didn’t tell Owen how proud he was of him and how much he loved him. Shawn is also survived by his loving parents, Michael and Jean Nixon, and his siblings Dasha Nixon (Nani), Catherine Bond (Pete), Father Michael Nixon, Titus Nixon (Colleen), and Maria Elsbernd (Alec), and Owen’s mother Sarah Appleman (Chad), as well as 20 nephews and nieces. A funeral Mass will be held at Blessed Sacrament Church in Tallahassee, FL on Saturday, May 15th at 1 pm, followed by internment in the BSC Columbarium. A light reception will be held in the parish hall. https://m.facebook.com/bsctallahassee/live In lieu of flowers, please make a donation to the Owen Shawn Nixon Trust Fund: Online: https://www.paypal.me/owenshawnnixonfund Checks can be made out to Sarah Appleman (Owen Trust Fund in subject line) and mailed to: 1775 Newman Lane Tallahassee FL, 32312. Susie Mozolic of Bevis Funeral Home is assisting the family with their arrangements. (www.bevisfh.com 850-385-2193)

Shawn Anthony Nixon was born September 15, 1975, in Los Angeles, CA. He graduated from Kalaheo High School in Kaneohe, HI in 1994, where he was a two-time State Champion in Cross Country, and won State Championships in both the 1600 and 3200... View Obituary & Service Information

The family of Shawn Anthony Nixon created this Life Tributes page to make it easy to share your memories.

Send flowers to the Nixon family.