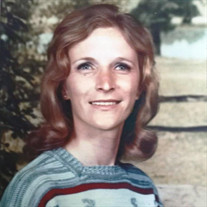 Sherry Lee Cartledge, age 75, entered into rest January 4, 2022 at Capital Medical Center. She born in Tallahassee and graduated from Florida High. Sherry was a U.S. Air Force veteran. She was a retired nurse. Survivors include her four... View Obituary & Service Information

The family of Sherry Lee Cartledge created this Life Tributes page to make it easy to share your memories.

Send flowers to the Cartledge family.