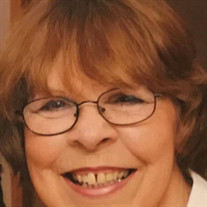 On Saturday, January 1, 2022, Sonya Lee Howard, 78, loving mother and Grandmother passed away in her sleep, after living with dementia, at Westminster Oaks in Tallahassee, FL. Sonya was born on March 17, 1943, in Braxton County, West Virginia, to Reese Lake and Bess W. Lake. At around 13 years old, she moved to Akron, Ohio and graduated from Kenmore High School in 1961. She attended the Cleveland Art School. On May 5th, 1962, she married Marshall E. Howard. They welcomed their daughter Lisa in June 1966. Marshall passed away suddenly in December 1969, and then their son Jonathan Marshall Howard was born in January 1970. In 1973, Sonya moved with Lisa and Jonathon to sunny Miami, FL. As a widow with young children, Sonya was a committed and loving mother who worked hard to provide for her family. Sonya worked as an artist in the commercial art field and leaves behind a legacy of murals, drawings, paintings, and box designs. Later, she moved to Atlanta near her sister Rona, and then to Tampa, FL with her daughter and grandchildren, and then Tallahassee, FL with her son and grandchildren. She was able to spend time with her grandchildren and enjoyed sharing her artistic gifts. Sonya was a kind and gentle soul who remained faithful, hopeful, and positive throughout her life. Along with her artwork, Sonya enjoyed reading, writing, and learning. One of the things Sonya liked was to wake up early and experience the peaceful morning with a cup of coffee. Sonya was preceded in death by her father, mother, sister Rona, sister Simone, and husband Marshall. She is survived by her daughter Lisa (Tom) of St. Petersburg, FL, and son Jonathan (Bernadette) of Tallahassee, FL; her granddaughters Anne Owenby (Will) of Tallahassee, FL; Katie Moore of St. Petersburg, FL; Rachel Howard of Pensacola, FL; Annette Howard of Tallahassee, FL; and Sarah Howard of Tallahassee, FL. She is also survived by her sister Pauline Cogar (Ronald) of Uniontown, Ohio; her brother Harvey Lake (Judy) of Norton, Ohio; her sister-in-law Barbara Fenton (George) of Newark, Ohio; and many nieces and nephews. A funeral mass will be held at the Co-Cathedral of St. Thomas More on January 29, 2022, at 1 PM. Sonya’s cremated remains will be inurned at the Greenville Memorial Garden in Akron, Ohio, with her husband in a private ceremony in the summer of 2022. In lieu of flowers, donations can be made to the Alzheimer’s Foundation of America. Kelly Barber of Bevis Funeral Home (850-385-2193 or www.bevisfh.com) is assisting the Howard family with their arrangements.

On Saturday, January 1, 2022, Sonya Lee Howard, 78, loving mother and Grandmother passed away in her sleep, after living with dementia, at Westminster Oaks in Tallahassee, FL. Sonya was born on March 17, 1943, in Braxton County, West Virginia,... View Obituary & Service Information

The family of Sonya Lee Howard created this Life Tributes page to make it easy to share your memories.

Send flowers to the Howard family.