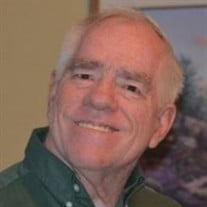 Steven “Bruce” Harter passed away on April 26, 2022. He was born June 25,1948, in Elwood City, Pennsylvania, to Roy Steward Harter and Hildur Elisabet Kinman Harter Pugliese. When Bruce was twelve, his family moved to Lake Worth, Florida, where Bruce graduated from Lake Worth High School in 1966. After high school, Bruce attended Florida State University where he received a Degree in Social Work and later a Masters Degree in Vocational Rehabilitation. Bruce met his wife, Peggy, while they were attending a class at FSU concerning students with disabilities. After they graduated in 1972, they were married and decided to remain in Tallahassee to pursue their careers and raise their family. Throughout his life, Bruce was an inspiring advocate for children with developmental delays and other disabilities. His career was dedicated to working with children and their parents to provide them with the best services available to help them obtain their maximum potential. In 2017, in honor of Bruce’s many years of working and volunteering in the field of special needs, The Dick Howser Center for Childhood Services was renamed The Bruce Harter Learning Pavilion. Bruce was an avid FSU Seminole fan for over fifty years attending football, basketball, and baseball games. He served for many years on the boards of Goodwill Industries and Envision Credit Union. Bruce was a member of Saint Paul’s United Methodist Church where he sang in the choir and served on and chaired numerous committees. He was also very involved with the Seekers Sunday School Class which he sometimes presided over and often taught. Bruce will always be remembered as someone who loved his family, his many friends, his opportunities to travel and life in general. One of the final comments that Bruce made summarized his life. With a smile on his face, Bruce said, “It was so worth it!” Bruce was preceded in death by his parents and his older brother, Gordon Douglas (Susan) Harter. He is survived by his wife of fifty years, Margaret (Peggy) Snell Harter; his son, Scott Harter of Coconut Creek, FL; his son, Benjamin (Roxy) Harter of Charlotte, NC; his sister, Melody (Charles) Harter Wise of Orange Park, FL; and numerous other loving family members and friends. A celebration of Bruce’s life will be held Saturday, May 14th, 2022, at 11 o’clock a.m. at Saint Paul’s United Methodist Church, 1700 N. Meridian Road. In lieu of flowers, memorial contributions may be made to The Bruce Harter Learning Pavilion, 3519 Easter Stanley Ct., Tallahassee, FL 32308. Kelly Barber of Bevis Funeral Home (850-385-2193 or www.bevisfh.com) is assisting the Harter family with their arrangements.

Steven &#8220;Bruce&#8221; Harter passed away on April 26, 2022. He was born June 25,1948, in Elwood City, Pennsylvania, to Roy Steward Harter and Hildur Elisabet Kinman Harter Pugliese. When Bruce was twelve, his family moved to Lake Worth,... View Obituary & Service Information

The family of Steven Bruce Harter created this Life Tributes page to make it easy to share your memories.

Send flowers to the Harter family.