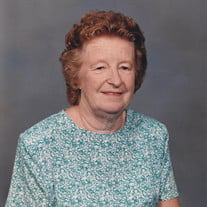 Sylvia Joan Williams Marsh went to be with the Lord on December 14, 2021. She was born in Oxford, England on April 26, 1926 and earned her heavenly wings on Tuesday December 14, 2021, she was 95 years old. While in England during World War II she met an American GI soldier, Douglas H. Marsh Sr. While he was on leave in England in 1944, they were married. Before the war was over, she gave birth to their first child, June “Christine” Marsh (Rabon). After the war was over Mr. Marsh returned to his home in West Virginia while Mrs. Marsh and June awaited transportation to America. Two years later Sylvia and June traveled on the Queen Mary to America and were reunited with her husband in West Virginia in 1947. The family settled in a small town called Crites where Douglas was a coal miner. While in Crites Sylvia gave birth to 4 more children, Douglas H. Marsh Jr., Carol, Alethia, and David. When work ran out in the coal mines the family moved to Charleston, West Virginia. Later with the help of Mr. Marsh’s brother, Charles and Robert “Bobby” Marsh, the family relocated to Tallahassee, Florida in 1960 where they have resided since. Sylvia worked as waitress at Woolworth’s lunch counter in downtown Tallahassee. When Woolworth’s closed, she worked at the Woolco lunch counter in Tallahassee mall and finally retired from the Executive Office building on North Monroe. Sylvia was a faithful member of Bethel United Methodist where she sang in the choir and attended all the church functions. Members enjoyed her Pea Picken Cake at the monthly Pot Luck lunches. She was also a long-time member of the Tallahassee British club. Sylvia loved to read, play cards, travel, camping, hiking, gardening, knitting, and FISHING, (she was the best fisher woman in the area.) Sylvia was preceded in death by her parents Daisy and Charles Williams. Her brother Leslie Smith, husband Douglas H. Marsh Sr., four of her children, Carol Hart, Lethia Lanham, David Marsh, and Christine Rabon, and her Great Granddaughter McKenzie Bailey. Sylvia is survived by her brother Don Williams (Lynette), nieces Bernadette and Louise of London, England. Her son Douglas H. Marsh Jr. (Debbie), son in law Charles Rabon, daughter in law Anne Marsh. Grandchildren, Teresa Stotz (Paul), Carlton Rabon, (Sara), Dawn Singlton (Jason), Joey Hart (Julie), Byron Marsh (Stacy), Jennifer Bailey (Roy Ashley), and Jason Lanham. Great grandchildren Jake, Skye, Kate, Addison, Landon, Anna, Abby, Tony, Brandon, Blake, Parker, Cameron, and a host of nieces and nephews. As the matriarch of her family, Sylvia held many roles. Wife, mother, friend, grandmother, great grandmother, advisor, babysitter, and a superior role model for all her family. Sylvia, Mom, Grandma, GG, Aunt Joan you will be missed by all. Thank you, Alzheimer’s Project and Big Bend Hospice, for your care and support in her final days. The family will receive friends from 5:00 p.m. until 7:00 p.m. Saturday, Dec. 18th at Bevis Funeral Home. Funeral services will be held 2:00 p.m. Sunday, Dec. 19th at Bevis Funeral Home, with burial to follow at Roselawn Cemetery. The service will be available to view live online at https://www.bevisfh.com. To watch, click on the word Obituaries at the top of the homepage, then click on the name of your loved one, and then the green Photos and Videos tab. Staff members will be available to answer questions or help with technical issues at (850) 385-2193. Susie Mozolic of Bevis Funeral Home is assisting the family with their arrangements. (www.bevisfh.com 850-385-2193)

Sylvia Joan Williams Marsh went to be with the Lord on December 14, 2021. She was born in Oxford, England on April 26, 1926 and earned her heavenly wings on Tuesday December 14, 2021, she was 95 years old. While in England during World War II... View Obituary & Service Information

The family of Sylvia Joan Williams Marsh created this Life Tributes page to make it easy to share your memories.

Sylvia Joan Williams Marsh went to be with the Lord on December...

Send flowers to the Marsh family.