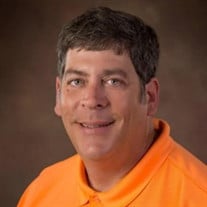 Terry Grant Womble, age 56, passed away unexpectantly on Sunday, September 19th. Terry was born on July 20, 1965, the youngest son of Marie and Earl Womble. He was raised in a loving, Christian home with his two brothers and sister as a lifelong resident of Tallahassee, FL. Terry attended North Florida Christian and Leon High School, graduating in the class of 1983. Following high school, Terry attended Tallahassee Community College and Florida State University, graduating with a degree in Political Science and Sociology in 1992. At Florida State he was an active student in campus activities including Scalphunters, Seminole Boosters and honored to serve as a KD Man. Terry met the love of his life, Jennifer Eakin in 1988 after playing practical jokes on her as a shoe salesman at Gayfers Department Store and they married in 1997. Terry was a loyal, dedicated, and devoted husband and proud father of two exceptional sons, Grant and Brock Womble. Terry’s greatest love was his family. Terry is affectionately known as the “Bug Man”, the founder and certified operator of his own pest control service established in 2008. Terry always took the extra time to talk individually with his customers, establishing loyal relationships and always had time to share the latest news of his sons. Terry was passionate about athletics and enjoyed playing Men’s Softball and Football. A fixture on the football field, Terry began volunteer coaching youth sports with the City of Tallahassee Parks and Recreation Myers Park football teams in 1994 and continued coaching Timberlane Raiders for a total of 20 years. Additionally, he volunteered as a coach at Deerlake Middle School from 2014-2016. Countless children in the Tallahassee area were lucky enough to be on one of his teams and learn the sport of football (or soccer or baseball) from someone who loved to play. Fans of the Chiles High School Timberwolves flocked to the games to hear his rich baritone southern voice announcing all the football games. As the voice of the Timberwolves and the Florida State University School Baseball Team, the crowd loved listening to his commentary and colorful descriptions of the action. Terry was tall in stature and his personality was equally as large. His sense of humor was second to none and he was passionate about music, nature, travel, science and education. An avid turkey hunter and fisherman, he loved the outdoors. He was a local businessman with pride in the community and served others making contributions to American Cancer Society, BNI, TalChamber Leads 5, Leon County Schools Business Partner, Capital City Rowing, Chiles Touchdown Club, Creative Preschool and Tallahassee Quarterback Club. Terry’s gregarious nature was contagious, and he loved to make people smile. Terry is survived by his wife, Jennifer Eakin Womble, sons Grant Donovan Womble and Brock Henry Womble, parents Marie and Earl Womble, brother Michael and sister-in-law Janice Womble, brother Richard and sister-in-law Jennifer Pater Womble, sister Karen and brother-in-law Steve Miller, mother-in-law Diane Eakin, father-in-law Michael Eakin (wife Janice) and loving nieces and nephews including Michael Blair Womble (wife Jonelle), John Womble, Emily Womble, Ryan Womble, Stephen Miller (wife Megan), Haley Rohe (husband Dustin Rohe, daughter Rayleigh), and Ethan Miller. He was preceded in death by grandparents Ila Wheeler Story and Lawrence and MayBelle Womble. The family will receive friends on Friday, September 24, 2021, from 6:00 – 8:00 pm at Bradfordville First Baptist Church, 6494 Thomasville Road, Tallahassee, FL 32312. The funeral service will be held on Saturday, September 25, 2021, at 1:00 pm at Bradfordville First Baptist Church. Kelly Barber of Bevis Funeral Home (850-385-2193 or www.bevisfh.com) is assisting the Womble family with their arrangements.

Terry Grant Womble, age 56, passed away unexpectantly on Sunday, September 19th. Terry was born on July 20, 1965, the youngest son of Marie and Earl Womble. He was raised in a loving, Christian home with his two brothers and sister as a lifelong... View Obituary & Service Information

The family of Terry Grant Womble created this Life Tributes page to make it easy to share your memories.

Send flowers to the Womble family.