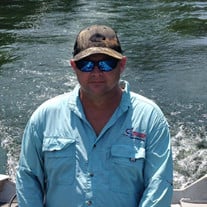 Thomas Ryan Core, 46 of Crawfordville, earned his wings and joined his loved ones on December 17, 2020. Ryan was born in Tallahassee on April 30, 1974 to Tommy and Shirley Crum Core. He leaves behind his wife, Teressa Fowler Core, brothers Neil (Jessica) and Christopher (Kandi); nephews and nieces, Dalton, Nailah, Gracie, Jessalee, Makayla and Leelan, Amy, Brittany, Sarah, Drew, Ashley and Kayleigh; furbabies Mason, Riley and Sophie, best friend Brad Harvey and a host of other family members and friends. Ryan, "Coach Core", leaves a legacy of love and integrity with his family and those who knew him. He has left behind wonderful memories of a loving husband, uncle, brother, cousin, son and friend. We are grateful for each and every day we got to see his face, his smile and hear all of the stories and jokes he shared with us. Ryan graduated from WHS in 1992 and made everyone so proud when he graduated from FSU on the Dean's List with his BS in Criminology in 2010. Soon after he received his Teaching Certificate and was able to pursue his true passion of mentoring, interacting and influencing the youth of Wakulla County which he loved so dearly. Ryan is widely known for being down to earth, with a matter-of-fact attitude and an opinion he freely shared with anyone regardless if they wanted to hear it or not. To a stranger he may have seemed a curmudgeon, but to those of us who truly knew him we understood that that hard exterior was only there to protect his very kind and generous heart. He cared deeply for so very many, even though he experienced so much loss in his own life. Ryan never let his own hardships and circumstances prevent him from helping and caring for others. He was always there if you needed him. Ryan had a true heart of gold. He was a loving husband and loved to spoil his wife Teressa who he fondly and forever referred to as "George". She meant the world to him and she was about the only thing that could get him out of the tree stand during hunting season. He was a dutiful and devoted son and brother. Always concerned about his families' health, well-being and much to their chagrin, their where-a-bouts. Any friend or colleague knew they could call on Ryan for anything. He would gladly give you the shirt off his back, or George's back for that matter, without a second thought if he thought they needed it. Ryan suffered for a long time, but he suffers no more! We know he is in a better place and that we will get to see him again someday. Until then, we will miss him every day and will continue to keep him in our hearts until we meet again. Nothing Gold Can Stay- Robert Frost Nature’s first green is gold, Her hardest hue to hold. Her early leaf’s a flower; But only so an hour. Then leaf subsides to leaf. So Eden sank to grief, So dawn goes down to day. Nothing gold can stay. In lieu of flowers, memorial contributions may be made to Wakulla High School: Carpentry Program or Angel Fund. (850-926-7125) David Conn and Kimberly Crum with Bevis Funeral Home of Crawfordville are assisting the family with arrangements. (850-926-3333, www.bevisfh.com)

Thomas Ryan Core, 46 of Crawfordville, earned his wings and joined his loved ones on December 17, 2020. Ryan was born in Tallahassee on April 30, 1974 to Tommy and Shirley Crum Core. He leaves behind his wife, Teressa Fowler Core, brothers... View Obituary & Service Information

The family of Thomas Ryan Core created this Life Tributes page to make it easy to share your memories.

Thomas Ryan Core, 46 of Crawfordville, earned his wings and joined...

Send flowers to the Core family.