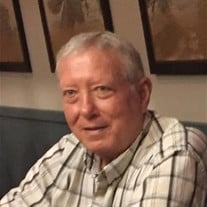 Tommy Joe Lovett went to be with Jesus on April 22, 2022 after a short and unexpected battle with lung cancer. He was born to James Benjamin and Edna Mae Lovett on July 30, 1942 in Alachua, Florida. When he was two years old, he and his family moved to Wakulla Station. Growing up, it was said by his younger sister Violet, that Tommy was the “absolute best”, always caring and looking out for his siblings. He attended Crawfordville High school, where he excelled in all sports, especially baseball and football. He held many sports records that remained unbroken for over 60 years. Tommy was also quite popular and along with his dear friend, Gloria Williams, was voted Mr. and Mrs. Crawfordville High their senior year in 1961. In 1963, Tommy married Shirley Harvey. Their son, Lance, was born in 1966. After their time together, Tommy met and married Charlotte Strickland who had two daughters, Lori and Darlene, and together welcomed their daughter DeeAnn in 1971. They were married until her death in 1975. In the summer of 1981, Tommy attended his 20th high school reunion and ran into an old classmate, Linda Sue Council. They started dating, fell in love, and got married in 1989. Sue brought two children to their union, Eric and Lisa. Tommy and Sue celebrated 31 years of married life together before her passing in 2020. Tommy worked as a superintendent at Seminole Asphalt Refinery in St. Marks for over 40 years. He retired in 2005, then finished up his working life operating heavy equipment at Blankenship Contracting. Tommy was a man of many talents including being a skilled welder, woodworker, musician, farmer, beekeeper, mechanic, and more. You name it, he could do it. He was an avid outdoorsman, hunting and fishing any chance he had. More than anything, he loved being “Pawpaw” to all of his grandchildren, teaching them about all of the good things in life. His and Sue’s house was their favorite place; swimming in the pool every summer, fishing in the catfish pond, riding in the golf cart all over their property, playing with the cows, mules, goats and whatever other farm animals were in residence at the time; big Easter egg hunts and the best Christmases a child could have imagined. He always made sure they were taken care of. Saturdays were not complete without a hard day’s work followed by a home cooked meal and Florida Gators football on TV. Tommy and Sue were always cooking something up in the kitchen and no one ever left their house hungry. He was a master card player and was quick to challenge anyone to a game, jokingly making up his own rules along the way. He was quick witted, a sharp thinker, and always willing to respectfully share his life’s knowledge with anyone that would listen. Tommy loved the Lord, always speaking of Jesus and how much He helped him get through the trying times in his life. In his last days especially, he spoke often of how he was ready to go to his “happy hunting grounds” and meet his Maker. He now joins his two former wives in heaven, who have gone on before him: His wife of thirty-one years, Linda Sue Lovett and the mother of his dearest surviving daughter, DeeAnn, Charlotte Strickland Lovett. He is also preceded in death by his parents: James and Edna, brother Mallie SR, and nephew Jerry “Buck” Pope II. Tommy is survived by his children Lance Lovett (Juli), Dee Ann Warren (Shane), Eric Mills (Darlene), Lisa Cook (Tom), nephew Mallie Lovett (Kathy); his sister Violet Stroud (Mac), brother John Lovett (Maryann), sister in law Doris Lovett; twelve grandchildren, nine great-grandchildren, several nieces and nephews, and dear friend, Gloria Williams.

Tommy Joe Lovett went to be with Jesus on April 22, 2022 after a short and unexpected battle with lung cancer. He was born to James Benjamin and Edna Mae Lovett on July 30, 1942 in Alachua, Florida. When he was two years old, he and his... View Obituary & Service Information

The family of Tommy Joe Lovett created this Life Tributes page to make it easy to share your memories.

Send flowers to the Lovett family.