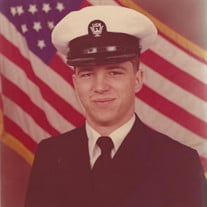 Tony Christopher, age 63 passed away peacefully on June 11, 2021 in Gainesville, Florida. Tony was born August 27, 1957 in Bainbridge, Georgia and grew up in Tallahassee, Florida. After graduating from Rickards High School in 1975, he attended Florida A&M University's School of Architecture, and later served in the United States Navy. After completing his military service, Tony continued to serve his community for many years in his career with Gainesville Renewable Utilities. He enjoyed visiting and reminiscing with family and friends, Motocross sports with his son, working on cars and Harley Davidson motorcycles, exploring natural Florida and the occasional antique shop. He is survived by his mother, Jeanette Dean Martin (Wayne) and sister Sandra C. Stallings (Don) of Tallahassee, his wife Pamela Christopher, and the most important person to him, his son, Anthony Skyler Christopher of High Springs, FL. He also leaves behind other special family members, Melissa Phethean, Sarah S. Griffith, Brad Stallings, 2 special great nieces, Savannah and Summer. aunts, uncles, and cousins. He was preceded in death by his biological father, Hermie Lambert. The funeral service will be at 10 AM on Wednesday, June 16, 2021 at Bevis Funeral Home, 200 John Knox Road, Tallahassee, FL 32303, immediately followed by a committal and honors ceremony at Tallahassee National Cemetery. Family will receive friends on Wednesday morning from 9:30 until service time. Kelly Barber of Bevis Funeral Home (850-385-2193 or www.bevisfh.com) is assisting the Christopher family with their arrangements.

Tony Christopher, age 63 passed away peacefully on June 11, 2021 in Gainesville, Florida. Tony was born August 27, 1957 in Bainbridge, Georgia and grew up in Tallahassee, Florida. After graduating from Rickards High School in 1975, he attended... View Obituary & Service Information

The family of Tony Christopher created this Life Tributes page to make it easy to share your memories.

Send flowers to the Christopher family.