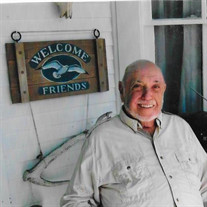 Virgil Jerome “Jerry” Allen, 92, passed away on February 8, 2021. He was born to Virgil Jerome and Boncyle Earl Stewart Allen in Birmingham, Alabama on August 22, 1928. Dad’s earliest memories were of living in Sophchoppy, FL with his parents and grand-parents, Charles Jackson Stewart and Stella De’Arlverez Stewart. They owned a small sawmill and worked on the railroad. Eventually, the family moved to Panacea, FL and operated a two-story hotel behind the Allen Service Station, ran two seine yards and a blue crab processing plant. When Jerry was in 5th grade, he moved with his mother and grandmother to Duval Street in Tallahassee, FL. He attended both Florida High School and Leon High School. In 1947 he was one of the first males to attend FSU the year it became co-ed. He was a charter member of the Theta Chi fraternity and the Cavaliers Dance fraternity. As an athlete, he earned a letter sweater on the swimming and diving team. Wakulla Springs was the place to be on weekends. There were no paved roads and it took a while to hitchhike. One evening, as it became too late to hitchhike back to Tallahassee, the Wakulla Springs manager, Newton Perry, allowed Jerry and his companions to stay the night. This resulted in an offer of a job as a lifeguard which he accepted. During the years that he was head guard, he fell in love with and married Anne McKinnon O’Quinn. Both enjoyed working at Wakulla Springs and later managing Ed Ball’s Silver Glen Springs resort. Soon, Clifford Jerome Allen was born followed by Terra Ann Allen (Carni) the next year on the same day. Charles Seward Allen was born several years later while Jerry and Anne managed Rainbow Springs. Raising three children along with resort management became hectic. By 1959, the family moved to Apalachicola, FL where daughter, Bonnie Jean Allen was born. Jerry was active in the Apalachicola community. He was a Lions Club International President and District Deputy with 11 years of perfect attendance, a 32nd degree Masonic Master Lodge 76-Scottish Rite Mason for 60 years, a Shriner, Worthy Patron Eastern Star, Vice President of Apalachicola State Bank for 21 years and the first Small Claims Judge in Franklin County. He might also be remembered as a “flashy dresser”. At the bank, he would wear the widest and Loudest Neckties. At the Methodist or Episcopal Churches he was colorful with purple pants and coral sports jacket. Easter was his favorite holiday. The Allen children would hide Easter eggs for him to keep him from going next door to steal the Siprell girl’s eggs. Jerry was known by many names: Sonny to his parents, Daddy, Papa and later on “Big Jere” to his children. He was Granddad to his grandchildren, David Carni, Shannon Carni (Sheriff), Nicole Ann Allen and Hanna Dana Allen. He was preceded in death by his parents, Virgil Jerome Allen, Boncyle Allen Land, Mildred Allen and Clifford C. Land, wife of 55 years, Anne Allen and son Charles (Chris) Seward Allen. He is survived by his children, Clifford, Terra, and Bonnie and his grandchildren. David Conn and Kimberly Crum with Bevis Funeral Home of Crawfordville are assisting the family with arrangements. (850-926-3333, www.bevisfhcom)

The family of Virgil Jerome "Jerry" Allen created this Life Tributes page to make it easy to share your memories.

Send flowers to the Allen family.