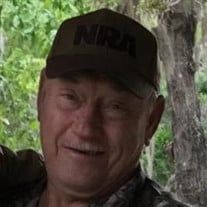 Willard Earl Sanders Sr. passed in peace on May 8, 2021 while surrounded by his loving wife and children. He was born January 8, 1945 in Sopchoppy, Florida to John Wooley and Pauline (Revell) Sanders. He was an avid outdoorsman and enjoyed hunting, fishing and gardening. As a young man he learned the value of a hard days work and completed every work day with dedication and took great pride in everything he touched. During his career he was a small business owner of a Tallahassee service station for several years. Later in his life he started his own Fishing Earth Worm harvesting and distribution business for more than 25 years where he serviced all of Florida, Georgia and South Carolina. His final 35 years of employment he worked proudly providing auto industrial electrical needs as an experienced mechanical technician. He was survived by his wife of 27 years Silvia Walsh-Sanders. Proud father to his three children and 6 step children: daughter, Kimberley Miller (Gerald) ;daughter, Tracey Robison (Roscoe);son, Willard Jr.(Teresa) ,and step-children; Anthony Walsh (Kyra), Bridgette Walsh Pelletier, Peter Walsh, Patrick Walsh, Paul Walsh and Christopher Walsh. Grandchildren; Timothy Mitchell , Blake Burns(Melissa), Ben Burns (Rachel), Donovan Mitchell (Misty), Sabrina Blanton (Thomas), Brittany Beach (Jason), Noah Sanders; Emily Walsh, Jayda Pelletier, A.J. Walsh, Gia Walsh, Olivia Walsh and 24 great grandchildren. brothers: Anthony (Shari) Sanders, Jerry Sanders , Richard (Pat) Sanders and Noel (Jan) Sanders and sisters: Callie (Richard) Strickland and Trixie Sanders; his best friend and chosen brother Jeffrey Corley; and numerous nieces, nephews, cousins and friends, too many to name. He was preceded in death by his parents, grandson Timothy Mitchell and brothers Jack Sanders, James Sanders and Gilbert Sanders. His smile and laughter were contagious and all that knew him loved him. He never met a stranger he couldn’t chat with for hours and by the end of the conversation he had made a new friend. His happiest days were those spent with his children and grandchildren. We wish we could have had him longer and are heartbroken he had to leave us way too soon. No man will ever compare to our Daddy, Granddaddy and Papaw as he was pure perfection and we will miss him dearly. David Conn and Kimberly Crum with Bevis Funeral Home of Crawfordville are assisting the family with arrangements. (850-926-3333, www.bevisfh.com)

Willard Earl Sanders Sr. passed in peace on May 8, 2021 while surrounded by his loving wife and children. He was born January 8, 1945 in Sopchoppy, Florida to John Wooley and Pauline (Revell) Sanders. He was an avid outdoorsman and enjoyed hunting,... View Obituary & Service Information

The family of Willard Earl Sanders, Sr. created this Life Tributes page to make it easy to share your memories.