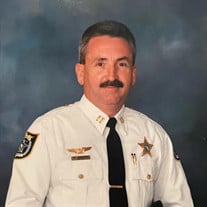 William “Bill” Talmadge Armstrong traded his flight wings for angel wings on Thursday July 15, 2021, with his daughter and son-in-law by his side in Tallahassee, Florida. Bill was 67 years young. Bill was born January 10, 1954 to parents William T. Armstrong, Sr. and Rosalia Filippello Armstrong in Tampa, Florida where he enjoyed a childhood filled with many Italian family meals and fun times spent together. In high school, his family moved to Orange County and Bill lived in the Orange County area the remainder of his life. In 1975 he began his career as a Law Enforcement Officer with the Orange County Sheriff’s Office (OCSO). Bill worked a combined 43 years as a Law Enforcement Officer and Pilot, in various capacities and with several agencies. Bill retired in 2019 as a Commander with OCSO. Bill was close with and proud of his daughter, grand-daughter and son-in-law and would frequently spend time with them. Bill was the person many family and friends would confide in, depend on for advice or reach out to in a time of need. He was always a strong, steady voice of reason, positivity and humor (though be it dark, but if you knew Bill, you appreciated that). Bill was known to do what was right even if it was not popular and was a true peacemaker. He will be missed by many. Survivors include his loving daughter Dana Danielle Lane, son-in-law Logan Lane; granddaughter Lillie Grace Green; bonus grandchildren Logan and Lauren; brother Norman Armstrong, brother-in-law Gregory Pszonek as well as many other family members and friends who will remember him fondly. Bill is now reunited with his parents and his brother, David Armstrong, who preceded him. Bill requested a small family gathering to celebrate his life, which will be scheduled for July 31st in Tampa, Florida. In lieu of flowers, memorial contributions may be made to PanCan.org to help in the fight against Pancreatic Cancer. Matthew 5:9 - “Blessed are the peacemakers, for they will be called sons of God.” Breanna Green of Bevis Funeral Home is assisting the family with their arrangements. (850-385-2193 or www.bevisfh.com)

William &#8220;Bill&#8221; Talmadge Armstrong traded his flight wings for angel wings on Thursday July 15, 2021, with his daughter and son-in-law by his side in Tallahassee, Florida. Bill was 67 years young. Bill was born January 10, 1954 to... View Obituary & Service Information

The family of William "Bill" Talmadge Armstrong, Jr. created this Life Tributes page to make it easy to share your memories.

Send flowers to the Armstrong, family.