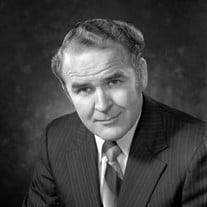 William “Carroll” Lamb, Sr, passed away peacefully on August 6th, 2021 at the age of 89. A memorial service will be held at 2:30PM on Wednesday, August 11th at First Baptist Church in Tallahassee followed by a reception at 4:30 at the home of William and Margaret Lamb, 2772 Millstone Plantation Road in Tallahassee. Memorial contributions may be made to Big Bend Hospice 1723 Mahan Center Blvd. Tallahassee, FL 32308 or First Baptist Church 108 W. College Ave. Tallahassee, FL 32301. Carroll was born September 27, 1931 to Sam and Ethel Lamb in Madison, Florida where he graduated from Madison High School and became a Christian at First Baptist Church in Madison in his early teens. After serving in the U.S. Army during the Korean War in the Counter Intelligence Corps, he returned home to graduate from Florida State University with a degree in marketing. He began his career with Sinclair Oil Company in Jacksonville, eventually moving to Tallahassee to work for the Florida Dept. of Agriculture as Chief of Marketing. He met his wife Rubye Carol at First Baptist Church in 1964 where they were married. Carroll became Executive Director and lobbyist for Florida Forestry Association and retired in 1994. During his retirement he established Lambs Tales Inc., with his tag line as a "Humorist and Plagiarist". Carroll was known for his speeches, humor and singing. He felt right at home whether he was on the big stage in front of a large group or visiting the local retirement communities where his singing brought smiles to all its residents. He loved people, and people loved him. Carroll never met stranger where his credo throughout his life was “Laughter is the hand of God on the Shoulder of a Troubled World”. He served on several boards, notably Southern Scholarship Foundation and Farm Credit of NW Florida. He was a member of National Speakers Association and also served as President of the Florida Society of Association Executives. He was an active member of First Baptist Church for 60 years where he contributed his musical talent and served as a Deacon. Carroll was preceded in death by his parents, Sam and Ethel Lamb. He is survived by his beloved wife Rubye Carol Davis Lamb of 57 years, his daughter Jennifer Carol Lamb Oppenheimer (Bill) of Atlanta, his son William Lamb, Jr. (Margaret) of Tallahassee, four grandchildren; Davis and Sam Oppenheimer, of Atlanta and Will and Molly Lamb of Tallahassee. His Brother, Sam (Evelyn) of Madison, FL, and sister Janice Lamb of Jacksonville, and six nephews. Another Angel has joined the Heavenly Choir singing “How Great Thou Art”. Susie Mozolic of Bevis Funeral Home (850-385-2193 or www.bevisfh.com) is assisting the Lamb family with their arrangements.

The family of William Carroll Lamb Sr. created this Life Tributes page to make it easy to share your memories.

Send flowers to the Lamb family.