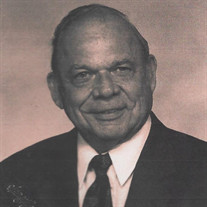 William “Bill” Murrell died peacefully on October 14, 2020. He was born in Bartow, Florida, on November 3, 1922, to Sterling Glenn Murrell and Lemma Irene Trimble Murrell. The family moved to Daytona within two years and lived there until moving to St. Petersburg Bill’s senior year in high school. In Daytona, Bill learned to swim in the Halifax River and bodysurfed in the Atlantic Ocean. He saw the likes of Sir Malcolm Campbell and Barnie Oldfield race their cars on the hard-packed sands of Daytona Beach. He played football and basketball at Mainland High School, though spent most of his time on the bench. He saw more action in the school marching band where he played trumpet. At St. Petersburg High, he met Margaret “Peggy” Baldwin who he was to marry after World War II. They were still married 71 years later when she died in 2017. Six months after Pearl Harbor, when he was 19 and in his second year at St. Petersburg Junior College, he enlisted in the Army Air Force Reserves upon being assured his active duty would be deferred until he completed four years of college. Six month later, he was in the Army flight school. By the age of 21, he was a pilot in Naples, Italy, flying C-47 transport planes in Europe and North Africa. He hauled gasoline and ammunition, dropped paratroopers behind German lines, towed gliders carrying soldiers into combat, flew the Red Cross girls and donuts to the troops and diplomats to meetings, and, when the war ended, brought back British prisoners of war. After the War, he returned home, married Peggy, and the two went to Chicago where Bill, thanks to the GI Bill, attended the Northern Illinois College of Optometry. They came home to St. Pete, and Bill opened his optometry practice in a Corey Avenue storefront on sparsely populated, but growing St. Pete Beach. Bill stayed in the Air Force Active Reserves, and 18 months after opening his office, the Air Force recalled him to serve in the Korean War. Retrained to fly the Grumman SA-16 Albatross, he practiced water landings in Tampa Bay off the St. Petersburg Pier. But with less than a year left to serve, the Air Force sent him to Denver instead of Korea. There he flew over the Rocky Mountains looking for downed aircraft and lost hikers and hunters. He would fly to California to practice landings, and it was there, as a lark, he made his storied flight under the Golden Gate Bridge. In 1955, back in St. Pete Beach, Bill and the island’s only dentist, Robert Cole, built their own building on 7th Avenue where the two practiced for decades. Forty years later, he sold the practice and went to work at the Pasadena Eye Center, retiring in 2006 at the age of 84, which he always said was “too early.” During those years, he and Peggy raised two sons and a daughter and participated in their community. Bill developed the patience of a husband whose wife always had what he sometimes thought were too many projects underway, be it for their Pasadena Community Church, the PTA, the Junior League, or the local swim teams, or researching family genealogy, or organizing St. Pete High class reunions. Bill found time to serve in the Kiwanis Club, on church committees—including 40 years as the chair of the ushers, as the President of the St. Pete Beach Little League, and even run for the St. Pete Beach City Council. Three years ago, they moved to Tallahassee where Bill navigated the challenges of getting older as he had lived his life, with good humor and kindness. Besides Peggy and his parents, his sister, Anne Marie Royal, preceded Bill in death. He is survived by his three children and their spouses, Randy (Karen), Rob (Carol), and Margaret Rush (Brian), eight grandchildren, and nine great-grandchildren. The family will hold a memorial service in St. Petersburg at a date to be scheduled. In lieu of flowers, the family would suggest a donation to the American Red Cross or to St. Petersburg’s Pasadena Community Church. Susie Mozolic of Bevis Funeral Home is assisting the family with the arrangements. (www.bevisfh.com 850-385-2193

William &#8220;Bill&#8221; Murrell died peacefully on October 14, 2020. He was born in Bartow, Florida, on November 3, 1922, to Sterling Glenn Murrell and Lemma Irene Trimble Murrell. The family moved to Daytona within two years and lived there... View Obituary & Service Information

The family of William Price Murrell created this Life Tributes page to make it easy to share your memories.

Send flowers to the Murrell family.