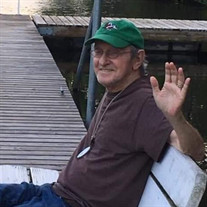 William “Bill” Michael Nix, passed in peace surrounded by his family, on Friday, October 15, 2021, at the young age of 72. Born January 15, 1949 in Greenville, SC, a loving father, proud grandfather, and a husband to his wonderful wife of 52 years. Bill was a Patriotic man of Christian faith; he served his country and the lord with the deepest of devotion. During his time of service, he served in the United States Navy, as a Hospital Corpsman, in Vietnam. Bill had a passion for music and instilled that love and talent into his sons Robbie, Richie, and Jon. His greatest past times were watching his boys play music and spending time with his grandchildren. If your song is to continue then we must do the singing… We will speak your name, tell your stories, and call to mind the joy you brought into the lives of everyone you met. Your voice will forever echo in our hearts combined with your memory that will never fade… He was predeceased by his father Richard Nix, mother, Alberta J. Nix, and daughter Casie Morgan Nix. He is survived by his wife Dorothy Laneva Nix, sister Madeleine P. Nix, son Robert William Nix, daughter-in-law Patricia W. Nix, son James Richard “Richie” Nix, daughter-in-law Kodie L. Nix, son Jon Dawning Nix; eight grandchildren, Ariel C. Nix, Elijah B. Nix, Zoe E. Nix, Andrew P. Nix, Layla A. Scott, Kadence R. Nix, Skylar A. Nix, Gavin C. Nix; one great grandchild Ava Wessel. Funeral service with military honors will be held at Tallahassee National Cemetery on November 8, 2021 at 1:00 PM. David Conn and Kimberly Crum with Bevis Funeral Home of Crawfordville are assisting the family with arrangements. (850-926-3333, www.bevisfh.com)

The family of William Michael Nix created this Life Tributes page to make it easy to share your memories.

William “Bill” Michael Nix, passed in peace surrounded by his...

Send flowers to the Nix family.