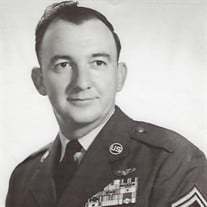 Wilmer “Jack” Golden, PhD, CMSGT USAF (Ret.) passed away on December 22, 2021 in Tallahassee, Florida. Jack was born in the Galilee Community of Jackson County, Florida on January 23, 1931 to parents Oliver and Mabel Golden. They were sharecroppers who moved every two years to farms, all within a five mile radius from Galilee Methodist Church. Jack enjoyed life with aunts, uncles, and cousins as they shared work with each other in the harvesting of crops and various church events. His family moved to Tallahassee in 1942 and Jack enrolled in Leon High School. He dropped out on his 17th birthday to join the United States Air Force, rejecting the advice of the old timers who said “never volunteer for anything.” Instead, Jack volunteered at every opportunity and became the youngest Master Sergeant in USAF history. In life, Jack enjoyed success in three areas: military, mental health, and service. He served 21 years and retired at the age of 38 as Chief Master Sergeant and Aircraft Maintenance Superintendent of the 379th Bomb Wing consisting of 17 B-52s and 15 KC-135s. He was a proud veteran of the Korean, Vietnam, and Cold War. He deployed six times to various places including North Africa, England, Greenland, Labrador, and Newfoundland. In Vietnam, he was an advisor to a South Vietnamese helicopter squadron and received a bronze star for rescue missions under combat conditions. He served three years in the Pacific Air Force as Aircraft Maintenance Quality Control Supervisor. This position included inspecting facilities in Hawaii, Midway, Japan, Philippines, Guam, Iwo Jima, and Wake Island. During his time in the USAF, Jack enrolled in the Military Bootstrap program where universities would provide night classes to nearby military bases. He earned his Bachelors in business management at the University of Nebraska before beginning his Masters at University of Central Mississippi. He finally completed his Masters and went on to earn his Doctorate at Florida State University. His love for music began early in life. At only 8 years old he played guitar accompanied by a vocalist at a wedding. In the 8th grade he played with a band on WTAL radio at 7:00 a.m. every weekday morning. Jack played in bands all over the world during his military career and was even featured on the Bobby Lord television show. On the weekends, he played bass with a band in Junaluska, North Carolina. His last performance was at 85, at the Tallahassee Seniors’ Daycare Center with two of his childhood friends from the 1940s. Jack spent his professional life in Tallahassee after retiring from the military. He specialized in addiction treatment for 20 years – developing and implementing the in-patient programs at Tallahassee Memorial Hospital, and later, at Capital Regional Medical Center. Jack also built and directed three residential treatment programs near Capital Regional. He was chairman of the board that developed the certification for Alcoholism Counselors in the state of Florida. Over the years, Jack himself gained certifications as a certified addiction specialist, rehabilitation counselor, and clinical hypnotist. He was also a licensed psychotherapist, licensed marriage and family therapist, and was trained in EEG therapy which he implemented in thousands of sessions – many of which treated children suffering from ADD/ADHD. From 1990 - 2000 Jack spent a week every month as a surveyor for the Joint Commission on Accreditation for Healthcare Facilities (JCAHO) and surveyed 170 facilities all over the United States. Jack also continued to pilot long after his service and his favorite memories were spent flying over the fields he picked cotton from as a child. In 2008, he received the Silver Star Award in recognition of his military service from the Tallahassee Senior Center Foundation and in 2016, he was overjoyed to participate in the Honor Flight to Washington D.C. Jack was also a proud Mason and Rotarian. Survivors include his loving wife, Leila Golden; children Gregory Golden (Gabrielle) of Australia, Patti “Blue” Smith (Tom) of Hawaii, Royce Burt (Sheila) of Jacksonville and Elizabeth Burt of Tallahassee; grandchildren Delaney and Jesse Burt as well as a host of extended family members. The family will be receiving guests for a visitation at Bevis Funeral Home of Tallahassee on Monday, December 27, 2021 at 6:00 p.m. Funeral services will be held at Bevis Funeral Home on Tuesday, December 28, 2021 at 2:00 p.m. to be followed by an interment and honors ceremony at MeadowWood Memorial Park. Breanna Green of Bevis Funeral Home is assisting the family with their arrangements. (850-385-2193 or www.bevisfh.com)