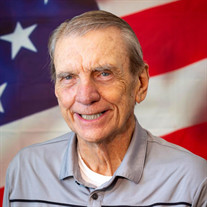 Yale Robert Gould, 81, of Tallahassee passed away peacefully at home on Thursday, April 15,2021 with his loving wife by his side. Born September 20, 1939 in Chicago, Illinois to Robert and Elenor Gould, he lived in Des Moines, Iowa, before moving to St. Petersburg, Florida at the age of 15. After high school, Yale attended the University of Florida where he earned his Bachelor of Science degree in Agriculture. Further continuing his studies while in the military, he earned his Master of Business Administration degree from the University of Arkansas. Yale spent his career in the Air Force as a Lieutenant Colonel where he was awarded the Bronze Star for Meritorious Service while serving in Vietnam. After his retirement from the military, Yale was fortunate to work many years as the Business Administrator at the law firm of his friend and former classmate, Leonard Carson, at Carson & Adkins in Tallahassee, Florida. Yale is survived by his loving spouse of 54 years, Ellen Lee Gould, son, Robert (Ginger) Gould of Tallahassee, Florida, and daughter, Christine (Raymond) Johnson of Lloyd, Florida. Also surviving are grandson, Garrison Johnson, of Lloyd, Florida, and brother, Frank “Buddy” Gould of St. Petersburg, Florida. Yale, with his wife and children, had the great opportunity to travel across the U.S. and Europe during his time in the military. He had a great love for animals and enjoyed his time with them. He spent many weekends, accompanied by his wife, competing in cutting horse competitions with his partner, American Quarter Horse, Young Lil Susie. Playing cowboy was one of his favorite things to do. Yale was preceded in death by his parents, Robert and Elenor Gould. We know that, in Heaven, he has been rejoined with his parents, and all of the wonderful animals that preceded him in death. They are all having a glorious time together. No services are scheduled at this time. Kelly Barber of Bevis Funeral Home (850-385-2193 or www.bevisfh.com) is assisting the Gould family with their arrangements.

Yale Robert Gould, 81, of Tallahassee passed away peacefully at home on Thursday, April 15,2021 with his loving wife by his side. Born September 20, 1939 in Chicago, Illinois to Robert and Elenor Gould, he lived in Des Moines, Iowa, before moving... View Obituary & Service Information

The family of Yale Robert Gould created this Life Tributes page to make it easy to share your memories.

Send flowers to the Gould family.